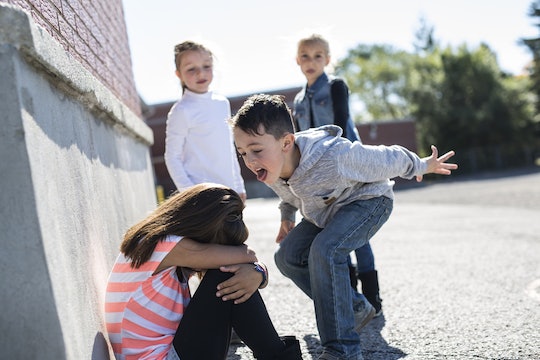 Bullying Has A Devastating Impact On Kids' Mental Health, According To A New Study

It is so common to have been in a position of being made fun of, ganged up on, and being bullied for no reason. Bullying is something that follows kids throughout their school years, and while many people recognize that it is a problem — the first lady has even made it her cause of choice — not many people recognize the lasting impacts of being bullied. And as a new study has found, the ways that bullying affects kids later in life sadly isn't entirely shocking. Essentially, bullying has a major impact on the mental state of the victims, and it's important that it's addressed head on.

Indeed, it might not come as a surprise to many after reading the findings of the new study, published in JAMA Psychiatry, that found out what kinds of impacts bullying has on a child's mental health. Researchers in the United Kingdom, led by Dr. Jean-Baptiste Pingault from University College London, found that bullying in kids was linked anxiety, depression, paranoid thoughts, and cognitive disorganization among children between the ages of 11 and 16.

The study found that these mental effects of bullying could last up to two years, according to Medical News Today, but dissipated after the five-year mark. These aren't easy things for adults to deal with, let alone a pre-teen or teenager who is going through some serious developmental changes while experiencing the side effects of bullying at the same time.

Knowing about these mental issues is certainly disheartening, especially since bullying starts so early on in life. In fact, research shows, according to Parents, that bullying behavior can start as early as 3 years old.

Mental health issues in children have been on a steady rise, according to the research, and the prominence of bullying can be blamed. And while these new findings may give parents insight into the implications of this type of behavior, it's not entirely brand new information. There's a plethora of data on the subject that can help further explain why bullying is such a problem and how experts suggest it be addressed.

Bullying Is More Prominent Than Ever Before...

Although bullying is so prevalent, more children are reporting that they are bullied than before. According to The Guardian, research conducted by the Child Helpline International found that calls to the helpline, which exists to help them through their problems with bullying, doubled from 2006 to 2012.

... & Mental Health Issues Are On The Rise

Like bullying, children's mental health issues are just as prevalent. An estimated 17.1 million children have or had a diagnosable psychiatric disorder, according to the Child Mind Institute. Statistics from the Child Mind Institute show that 31.9 percent of children are prescribed with having anxiety disorders and 14.3 percent of children have depression and bipolar disorders.

Having issues with mental health at a young age can hinder not only a child's self-esteem, but it can impact their performance in school as well. According to the Child Mind Institute, if mental disorders are left untreated, they are known to have an effect on a student's ability to learn and function in a school environment.

How This Should Be Addressed...

Although the negative side effects of bullying do dissipate over a period of time, five years can feel like an eternity, especially to teenagers. In order to make these long-term effects seem "less," the study concluded that intervention is necessary — not only for bullying, but to reduce the stigma of mental issues. The authors of the study wrote:

Specifically, we must be mindful in any prevention effort that our goal should be to not only stop the bullying but also to address potential preexisting vulnerabilities to prevent mental health in the long term.

The study's authors believe that when addressing bullying in schools — whether that be through school assemblies or presentations from teachers — programs should simultaneously address mental health problems and promoting resiliency. The more kids know that they are not alone, the earlier they can address these issues head on and work on solutions. This way, children can be treated with the cognitive behavioral therapy that they need to address their problems, according to the Anxiety and Depression Association of America.

Bullying might be common, but the long-term effects of it shouldn't have to be. Addressing the problem early on and getting children the support they need will help.

More Like This
New Study Finds Brains Of Teens Who Lived Through The Pandemic Aged Faster
David Harbour Transforms Into A Santa No Kid Wants To See In 'Violent Night'
Festive Mommy & Me Holiday Nail Ideas To Try
If Your Kids Love Their Elf, You Don't *Have* To Put Him Away On Christmas