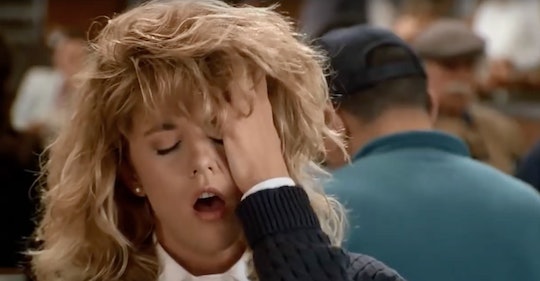 When it comes to sex, there are a lot of stereotypes about the differences between men and women's expectations of the deed. According to a new study done by Saucey Dates, we at least now know exactly how long women think sex should last — and how long it actually does. Saucy Dates spoke to almost 4,000 people and asked them two simple questions: How long did sex, not intercourse, last the last time you had it and how long would you like it to last?

Surprisingly, people were reportedly pretty honest. On average, according to the Saucey Dates survey, women would like sex to last just under 26 minutes, which sounds about right, since it typically takes a woman about 20 minutes to reach an orgasm, though every one is different. In comparison, it takes men about five to 10 minutes. But there's good news, according to this survey: women responded that they would like sex to last about 25 minutes and 51 seconds, while men expected it to last about 25 minutes and 43 seconds, which is so close!

Alas, the actual times that women and men gave were equally as similar. But way under that 25-minute expectation. On average, sex was actually lasting, for both women and men, anywhere from 15 to 17 minutes. That sounds about right, huh?

British and Australian men were close behind, according to the survey, with the same peak age, but with a noted staying power at around 16 minutes. Indian men came in last, peaking in terms of duration at around 50 years old and lasting for just over 15 minutes. The data also hows that male duration increases over age and then starts to take a steep decline with age.

Sadly, though, this means that it's possible women all over the world are left unsatisfied. Maybe. Exactly how (and how quickly) one reaches an orgasm is totally up to each person, and this data did not include foreplay, which is totally essential to most female orgasms. The data, and the premise of the survey, is totally based on heterosexual, penetrative sex, which isn't always everyone's preference anyway.

In fact, the female orgasm is totally misunderstood. Most scientists didn't even really understand how the clitoris worked until about 2009. According to the American Psychological Association, only about 8 percent of women can have an "unassisted" orgasm through vaginal penetration, which means that most women need clitoral stimulation, along with penetration to reach orgasm.

However, 100 percent of men report being able to reach an orgasm through penetration alone, according to the same APA study. There's also a huge culture gap when it comes to sexual pleasure. Both men and women grow up watching TV and movies that make it seem like every woman can orgasm through vaginal penetration — which we know is bogus.

Sadly, a 2012 study from the American Sociological Association also shows that some young women don't feel like they "have a right" to orgasm, especially if it's a one night stand and tend to cater to a man's sexual needs first. Because of this cultural bias towards heterosexual, male-focused sex, some women don't even know how to reach orgasm by themselves, let alone able to instruct a partner about what they need.

Hopefully, with a more sex positive and feminist outlook, more women will feel empowered to get what they need from sex with their partner. And only fake it if they want to.

In fact, surveys such as Saucy Date's only perpetuate some of these problems by focusing on how long penetrative sex lasts, without the ever important foreplay, lasts. Sex is so much more than that.

Although it's good to know that women and men are on the same page about how long they want their intimate time to last, maybe it's better to focus on what's really important, like whether both partners leave satisfied. After all, that is the point, right? And it's no fun if you're watching the clock.

More Like This
Introducing My Boyfriend To My Kid
Queen Elizabeth II's Most Romantic Quotes About Prince Philip
Widows Are Expected To Mourn Forever — How Do I Date Again Without Shame?
How To Tell If Someone Is Lying To You: 34 Signs To Watch For