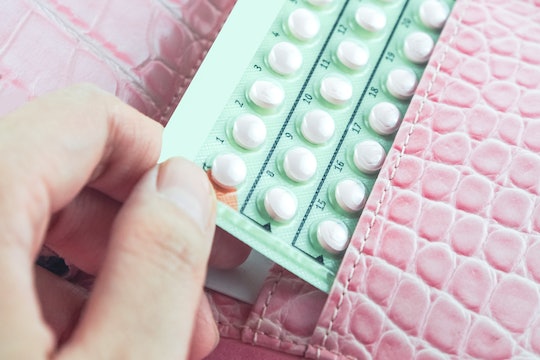 This Is How Trumpcare 3.0 Could Make Your Birth Control Really Expensive

It was already clear that Graham-Cassidy, the GOP's latest attempt to replace Obamacare, would be really bad for women. But over the weekend, the text of the bill got much worse. Turns out that Trumpcare 3.0 could affect birth control coverage in a big way, should it pass. The short version? Under the revised bill, states would no longer have to cover birth control at all.

See, it's still unclear whether the bill has enough support to pass. Some Republican senators like John McCain and Susan Collins have expressed concerns about, say, the fact that Republicans are pushing for a vote before the Congressional Budget Office has time to thoroughly score the bill, or the fact that Graham-Cassidy seems likely to take away insurance coverage from millions of Americans. But other far-right senators like Twitter favoriting fiend Ted Cruz are hedging support because they feel that the bill doesn't go far enough in taking away certain Obamacare protections. So over the weekend, the authors of Graham-Cassidy did some tweaking. And one thing that fell onto the chopping block? Birth control benefits.

If Graham-Cassidy becomes law, individual states would be able to waive current protections, and allow insurers to strip birth control coverage, explained Erica Sackin, the director of political communications for Planned Parenthood, in a series of tweets on Monday afternoon:

So, that amazing no-copay birth control benefit you may be using right now, to help you affordably control your reproductive future? Depending on the state in which you live, that could totally go away — a.k.a. it might be time to consider getting that IUD, pronto.

Or, to break down Obamacare birth control savings individually, lead study author Nora V. Becker said, "We estimate that the ACA is saving the average pill user $255 per year, and the average woman receiving an IUD is saving $248," according to TIME.

For lower-income women in particular, that's huge. Savings of that kind could very well make the difference between a woman being able to practice safe, responsible sex, or having to rely on less effective methods that would be much more likely to lead to an unwanted pregnancy for which she might be financially and perhaps emotionally ill-prepared. (And just in case that woman thought about terminating her pregnancy, Graham-Cassidy does its best to take away abortion coverage too, as Vox reported.)

Unsurprisingly, this is not the only way in which Graham-Cassidy punishes women. In addition to curtailing abortion and birth control coverage, the bill would block women from using Medicaid plans to receive services at Planned Parenthood for one year, as The Atlantic reported. What's more, according to the legislation, the bill would also allow states to stop requiring insurance companies to cover maternity benefits on individual plans, removing maternity care from the list of essential health benefits. And as any mother knows, those maternity costs can add up fast.

All in all, the latest healthcare bill is bad for women, and it only seems to be getting worse as it undergoes more revisions. But will it pass? The verdict is still up in the air at this point. So, if you've been holding back, now is the time to call those representatives.