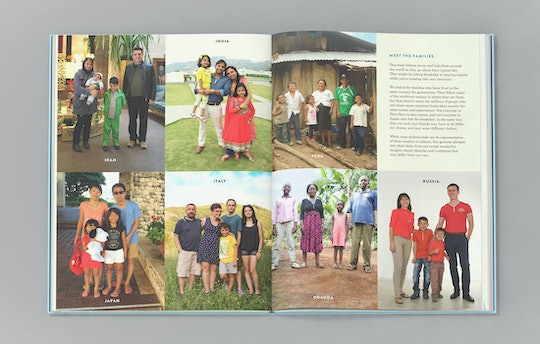 Children's books have a long history as vehicles for more complex messages — see The Lorax on sustainability, The Little Engine That Could on feminism, Paddington Bear on immigration — the list goes on. Recently, some authors have become more explicit in that messaging. Even adults are benefiting from the ways today's children's book writers break down difficult topics in a way that's easy to digest. Take, for example Matt Lamothe's This Is How We Do It, a must-read for anyone of any age.

At first glance, the concept of Lamothe's newest book seems pretty simple. This Is How We Do It ($15) offers a glimpse at the day-to-day routines of of seven kids from around the world — something you could easily research via Google, right? Wrong. In order to accurately portray the experiences of kids from various countries — specifically Italy, Japan, Iran, India, Peru, Uganda, and Russia — Lamothe relied on real kids rather than the internet. In an e-mail exchange with Romper, Lamothe says he spent a great deal of time finding families from various countries who were willing to participate in his project. This meant reaching out to friends of friends of friends who knew someone who could speak to the experieince of living in a particular country. Once the connections were made, Lamothe was able to being what would be a lengthy research process.

No matter who you encounter, regardless of their background, there is always something that you’ll have in common, something relatable.

"I created a very detailed and extensive questionnaire that asked for specific photographs and answers," Lamothe tells Romper via e-mail. In many cases, he has to get translators involved with initial questionnaire as well about six months' worth of follow-up questions. "The families were really generous with their time, answering my pestering questions about many of the details I was unfamiliar with," he says. "Once I’d amassed this trove of images, I used them as reference to illustrate the book."

The creation of this book began long before Lamothe devised his questionnaire. The inspiration struck the designer in the early 2000s during a trip to Uganda. Prior to making the trek, Lamothe's only images of the country were based on things he'd heard or seen in the media. Upon arriving, however, he realized just how narrow this view was. He tells Romper:

"In the U.S., you get a very one-dimensional point of view about Africa, and I was not surprised to discover that the way of life there is much more nuanced than what the news presents. "So many of our experiences were universal, while so many customs and ways of thinking seemed incredibly foreign and specific to Uganda. I was intrigued with the idea that no matter who you encounter, regardless of their background, there is always something that you’ll have in common, something relatable."

Armed with this knew knowledge, Lamothe wanted to find a way to share it with others and, more specifically, with those whose world views are still being shaped. But children's literature was uncharted territory for Lamothe, who had only ever worked on books for older reasons. Still, he felt a sense of obligation to create this story for younger readers.

"I feel there is a lot of room in kid’s literature for non-fiction learning and I wanted to make a book that shows kids a world outside themselves," he says, adding that This Is How We Do It would allow kids a chance to see other parts of the world without having to travel, as that is a luxury for many.

Once Lamothe had nailed down the concept of the book, he had to conceive the characters. This was a big undertaking for the author, as he wanted to make sure the book, "covered as wide a range as possible when it came to culture and geography." In order to make the characters as diverse as possible, Lamothe decided not to include an American child.

I think it’s important for kids to understand that there are many things that tie us together; we’re not just products of our cultures, but we are individuals too.

"Initially, I wanted to have an American kid in the book, but the more I thought about it, the less it made sense," Lamothe says. "Most likely the child reading the book would be American, and they already knew what they did all day, so it wouldn’t be particularly compelling."

And he's right. One of the main goals of This Is How We Do It is to teach kids to look beyond skin color and birth place, and focus on shared beliefs, traits, and interest. By eliminating what would have likely been another white character from the narrative, Lamothe further drives his message home. Which, considering President Donald Trump's racists remarks about immigrants and foreigners, is an important one for people of all ages to hear.

"In our current political climate, immigrants and foreigners are often vilified," he says. "Their entire identity is branded as being from a specific country, or of a particular religion. I think it’s important for kids to understand that there are many things that tie us together; we’re not just products of our cultures, but we are individuals too."

In addition to teaching kids a lesson on empathy that will, Lamothe hopes This Is How We Do It will help kids create a "kinder worldview" that will last long after their gone.

"I hope young readers feel a sense of global citizenry after reading This Is How We Do It.” he says. "Maybe after getting a glimpse into the lives of the kids from these seven different countries, they’ll become interested in other places."

Is it a lofty goal? Perhaps, but it's one the world needs now more than ever.