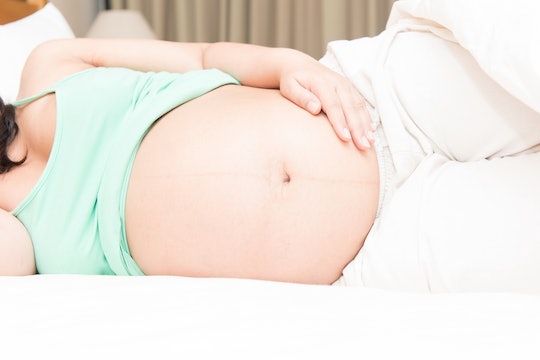 This Is The Safest Sleep Position Towards The End Of Pregnancy, New Study Advises

When you get pregnant, there are about a million little things you have to learn and adjust to. And on top of that, it can feel like there are a million more competing schools of thought in what's best for you and your growing baby. So, when research and science can definitely back up a particular piece of advice for expecting mothers, it's especially helpful. So, what's the best sleep position toward the end of pregnancy?

According to Science Daily, women whose pregnancies are coming to an end should be sleeping on their side, not their back. The reasons why are numerous, although perhaps most important is the fact that this latest research is "the first study to monitor unborn babies overnight and at the same time record the mother's position during sleep," according to a press release on the study.

So, while, of course, pregnant women could probably sleep in whichever (safe) position they're comfortable in, these new findings further prove that there technically is one position that has proven to be the most beneficial for mother and child. As "sleep position of women in late pregnancy has been shown to be related to an increased risk of late stillbirth," according to the research, it really is important to know which is the best, most recommended one.

Using an infrared video camera, researchers with the University of Auckland were able to closely track women's sleeping positions while they were pregnant, and her heart rate, as well as follow the fetus' movements with an ECG machine. And what they uncovered was fascinating.

According to the press release, "When the mother slept on her back, the fetus was less active." And in case you aren't sure whether or not that's a good thing (because let's face it, growing a human is complicated), it's generally accepted that a more active fetus is healthier. Of course, every pregnancy is different, and according to Psychology Today:

Awake or asleep, the human fetus moves 50 times or more each hour, flexing and extending its body, moving its head, face, and limbs and exploring its warm wet compartment by touch.

The study looked at "30 pregnant women at 34-38 weeks gestation," all of whom were healthy, and eventually gave birth to healthy babies. And during their research, researchers discovered that not only did sleeping on their sides promote more fetal activity, but shifting positions also resulted in some interesting results as well. As Science Daily reported:

When the mother changed position during sleep, for example from her left side to sleeping on her back, the baby quickly changed activity state and became quiet or still.

And this new research isn't the only evidence that sleeping on your side is the most beneficial. Midwife Christy LeBlanc told Today's Parent that "it ensures that you’re not compressing the inferior vena cava, which can restrict blood flow to the placenta." What's more, according to Newshub, "Women are four times more likely to have a stillborn baby if they sleep on their back in the last trimester." With all of this in mind as well, this new research shouldn't be brushed off.

As most mothers, and moms-to-be, will know, sleeping while far along in your pregnancy is already a difficult task. However, knowing that there's a way to help your baby be healthier just might be the kind of motivation to help work your way through those uncomfortable moments. Because every mother wants what's best for her child, even before they're born.

More Like This
These 4 Sleeping Positions Will Keep You Comfortable After A C-Section
A C-Section Actually Doesn't Take As Long As You Think, According To Experts
Should You Be Giving Your Toddler Melatonin To Help Them Sleep?
20 Moms Reveal Their First Pregnancy Craving