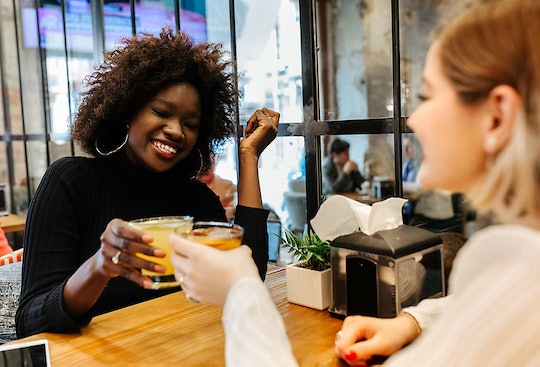 Would you like to booze it up today without feeling like garbage tomorrow? It's a common dilemma. As it turns out, there's a somewhat ideal time of day to drink alcohol if you want to avoid a hangover tomorrow. A little planning now can help prevent major headaches in the morning.

And although it may seem like a minor part of the whole drinking equation, the time of day you choose to imbibe is crucial. "Alcohol absolutely affects the body differently depending on the time of day you drink, and it is all because of the body’s circadian rhythm," says Dr. Lawrence Weinstein, chief medical officer at American Addiction Centers. Most all bodily functions, from body temperature to eating habits, are affected by the circadian rhythm, as Dr. Weinstein further explains.

For the most part, day drinking as early as possible may help decrease the chance of getting a hangover the next day. "More often than not, drinking during the day is commonly correlated with food," Dr. Weinstein says. For instance, sipping a mimosa during brunch is pretty common. "In this situation, the amount of food eaten during the meal will affect the time it takes for alcohol to reach the bloodstream, and subsequently lessen the effects," Dr. Weinstein says. For the most part, having a beer or two with lunch or sipping a Bloody Mary during the morning today would not be as likely to cause a hangover tomorrow.

That said, there are a lot of variables at play in the drinking and hangover equation. If you take the "bottomless mimosas" on sale at brunch as a sort of challenge, then the next morning could very well be a rough one. Because so many things affect the way your body handles alcohol, from how much you've eaten to the type of drink you're enjoying, there's isn't a universal rule about how much a person can drink and avoid a hangover, according to the Mayo Clinic. Although starting the party earlier gives you a better chance of overcoming the effects of alcohol, it still isn't guaranteed. If you overdo it, you're going to feel the effects.

That said, there are a few general rules to keep in mind for hangover avoidance. First, choose your alcohol wisely. Drinks that are high in congeners, such as whiskey, are more likely to cause a hangover, according to Healthline. Instead, opt for colorless drinks such as vodka or gin. Next, keep your body hydrated with water while you drink alcohol. Because alcohol suppresses the hormone vasopressin, an anti-diuretic, boozing does make you urinate more, according to Harvard Health Publishing. (Yeah, it wasn't just your imagination.) However, this extra urination can also make you dehydrated. By drinking water, the body can replenish some of the hydration it needs. Lastly, know your limits with alcohol and enjoy it in moderation, as explained in the Mayo Clinic. With a little planning in regard to the time of day, it's possible to enjoy a drink or two one day without experiencing a crushing hangover the next morning.