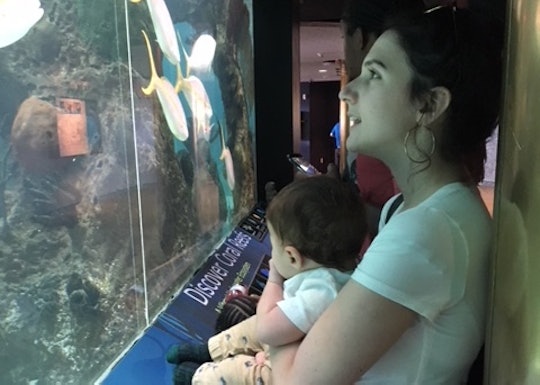 This Is The Biggest Lie Society Tells Working Moms

It’s 7:00 p.m. and I am seated on the floor with my 10-month-old son, trying to prevent him from destroying a copy of Madeleine and the Gypsies while I interview a sexual assault survivor for a story. I’ve been trying to get this interview for months, and I am taking notes on my knee, trying to sound supportive when Sol rips out the page where Madeleine and Pepito are rescued by Miss Clavel. I rescue the book and he starts bawling. The woman on the phone is also crying and, honestly, I feel like crying, too. There’s only one thought going through my head, and it’s the same one that crosses most working moms’ minds at least 7 or 8 times a day: how the f*ck does anyone actually do this?

Like Pinterest party ideas, #cleaneating Instas, and tampon commercials where the lady is really, really enjoying wearing a tampon, work-life balance is one of those tropes that seems designed to make you feel bad about yourself. The idea that women can “have it all” has taunted working moms for decades, and while some women have publicly pushed back against the dominance of this idea — Sheryl Sandberg and, most recently, Ivanka Trump among them — it still very much hangs over the heads of most working mothers, particularly those who, like myself, are equal parts ambitious and relentlessly self-flagellating.

When he goes to sleep, I’m working; when he wakes up, I have a few minutes of cuddling with him before I have to go back to work.

I work full-time as an editor and journalist, which means the second shift — when I get home from my job and begin the dinner-bath-bed routine — often collides with more work. I spend an awful lot of time glued to my phone answering emails while trying to prevent my son from literally tearing our cat’s tail off. When he goes to sleep, I’m working; when he wakes up, I have a few minutes of cuddling with him before I have to go back to work. I don’t have anything nearly approximating work/life balance, and what’s more, I don’t think it’s possible for anyone else to, either.

In fairness, anxiety over whether you achieve work/life balance is largely predicated on your level of privilege. If you’re a single mother of two holding down multiple part-time jobs while attending night school to put food on the table, you don’t have the luxury of considering whether you have an appropriate work/life balance; it’s likely pretty damn low on your list of priorities — it’s like asking an ER doctor who’s just worked a 72-hour shift whether they’ve had their eyebrows threaded recently.

As someone who is white, upper middle-class, and extremely career-oriented, I am the target audience for work/life balance anxiety. Before I gave birth, I’d assumed that achieving said balance would be difficult, but not impossible. Everyone warned me that when I became a mom, everything about my life would totally change: my sleep schedule, my sex life. But I’d gone without sleep for extended periods of time before. I’d had dry spells in college before. Who was to say this would be any different?

I’m constantly feeling guilty that I’m neglecting either my job or my child every second of the day.

Of course, as any mom will tell you, that assumption is not only wrong, but outrageously, stupidly wrong. From the second my baby was pulled out of my body, my life has become both infinitely more rewarding and a lot more difficult, and as he gets older and I acquire more responsibility in my career, the demands of work and family become more entrenched. It’s ridiculously hard, in a way that I didn’t quite anticipate.

Not only is it that I just don’t have enough hours in the day to do everything I want, but I’m constantly feeling guilty that I’m neglecting either my job or my child every second of the day. When I’m answering emails or going on a work call, I feel like a bad mom, and like Sol is going to end up being the type of guy to put “no fatties, please” on his Tinder profile because of my maternal neglect. When I’m sitting on the floor playing with my son and my phone is in the other room, I feel like a bad employee. Becoming a mother means every choice you make is fraught with a complex array of emotions, the most prominent of which is usually guilt.

Speaking of guilt, I’m also starting to believe that there is no possible way to be a working parent and sustain a healthy marriage at the same time. Since taking on more responsibilities at work, my relationship with my husband has completely transmogrified; in the span of one year, we’ve gone from being a fiercely loving married couple with a healthy sex life to mildly passive-aggressive roommates. I don’t fault my partner for this, as he is an incredibly present and supportive parent; in fact, in many ways, he’s much more present and supportive than I am. It’s just that in the grand scheme of all the things I have to do on a daily basis — wash bottles, do laundry, answer emails, revise drafts, play with baby so he doesn’t turn into a fatty-hating serial killer — sex honestly just seems like kind of a waste of time. Even though I still find him incredibly attractive, it seems smarter from a time-management perspective to spend the time before bed answering emails or fuming with quiet resentment at him for failing to drop off the dry cleaning that one time last week, than it is to carve out 10 minutes for boinking.

Being a good mom is exhausting, in the exact same way that being a good employee is. You have to be alert and responsive to another person’s needs 24/7. You need to be able to solve problems creatively at a moment’s notice. You have to fake enthusiasm for things that you think are dumb or bad or that you just don’t give a shit about. (If I have to shriek with delight and say, “Good job, Solly!” when my son so much as farts one more time, I’ll probably throw his xylophone out the window.) Above all else, you need boundless stores of energy that no one person has, save for perhaps talk-show hosts and sophomores hopped up on Adderall during finals.

Being a working mom is the ultimate 'two dates to the dance' scenario: there’s no way you can go to the prom with both the dreamy college quarterback and the nerdy but adorable class clown, but you can’t quite manage to make a decision between the two, which ultimately leads to a lot of zany hijinks and bathroom quick-changes.

There are many reasons why work/life balance is impossible to achieve, from the more granular policy-related reasons (the fact that our country does not offer mandatory paid leave for new parents) to the more abstract (a misogynistic culture that holds women in general, and mothers in particular, to impossibly high, often contradictory standards). Yet the primary reason why work/life balance is impossible is because, regardless of your gender or your job or the country you live in, being a parent is by far the hardest job you will ever have. There are moments of pure elation, yes, but they arise in between long stretches of frustration and sadness and anger and frankly, more often than not, boredom. And unlike any other gig I’ve ever had, being a mom is one job where there is no hope of a pay raise or a promotion, nor is there any scenario where you’ll ever be able to quit.

Being a working mom is the ultimate “two dates to the dance” scenario: there’s no way you can go to the prom with both the dreamy college quarterback and the nerdy but adorable class clown, but you can’t quite manage to make a decision between the two, which ultimately leads to a lot of zany hijinks and bathroom quick-changes. The thing is, though, this scenario is only amusing on sitcoms like The Brady Bunch (I mean, to the degree you find shows like The Brady Bunch amusing). In real life, it likely only leads to hurt feelings and wounded egos and poor timing and embarrassing wig mishaps. It’s the same with being a working mom: no matter how much it pains you to think that you can’t have both things, you desperately want at the same time, the truth is that you really can’t, at least not without hurting people or giving something up along the way.

I am ambitious, hard-working, educated, and, admittedly, economically privileged. I have a husband who loves and supports me, an incredibly helpful family network, and a job with a great parental leave policy. But the truth is that I still can’t quite figure out how to juggle these two dream dates, and I’m starting to think that no one really can.

That’s not to say, however, that I won’t try. I’ll do my interviews on the floor while trying to prevent my child from methodically licking each and every one of his diapers. I’ll insist on turning my phone off every night at a certain time, so I can put my baby to bed and sing him Pixies songs as lullabies. I think the concept of work/life balance is not only unfair to women, but also impossible to achieve — but that doesn’t mean I’m not going to try to achieve it.

I love both of my jobs a lot; having both at the same time imbues my life with a depth and feeling of fulfillment that I never quite thought was possible before. And even though the harder of these jobs will always take priority, that doesn’t mean I’m not going to try like hell to have my cake and eat it too — even if a few Madeleine books get destroyed in the process.