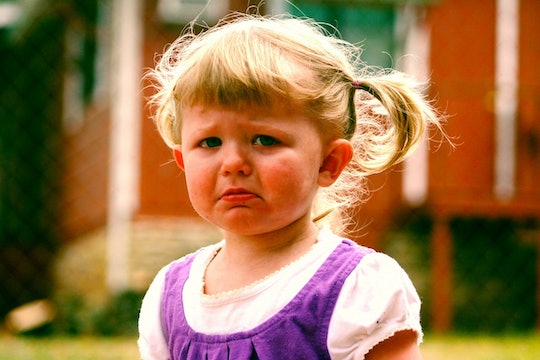 This Is The Most Effective Discipline Technique For Kids, According To Science

Although it may not be the most enjoyable aspect of parenting, discipline is still an incredibly important piece of the puzzle. Without it, kids would be free to do whatever they please with no repercussions. (Which, sadly, doesn't fly in the real world.) However, an overly harsh approach to discipline can result in unintended — and often negative — long-term consequences. Parents struggling with children who are exhibiting concerning behaviors might wonder what is the most effective discipline technique for kids. And there are actually a few scientifically-backed theories.

Unfortunately, there is no one-size-fits-all approach to perfect discipline. This depends on a number of factors, including age, the situation, the personality of the particular child, and more. A study from Oklahoma State University titledToddlers Need Both Positive Parenting and Consistent Consequences From Mothers, found that the most effective parental response is dependent upon the offense. For example, behaviors like whining, simple refusals and negotiating were best met with mothers' offering alternatives. Similarly, for things like tantrums, noncompliance and hitting, "broad power assertion" was the best choice.

Overall, the "most effective approach to parenting and discipline is a consistent, balanced, responsive interaction between parents and their young children," as explained in an article from The Huffington Post:

One discipline technique has been proven by science not to be effective: Spanking. But how, exactly, does spanking affect children? Alan E. Kazdin, PhD. — the John M. Musser Professor of Psychology and Child Psychiatry at Yale University and director of the Yale Parenting Center — told the American Psychological Association (APA) that corporal punishment does not develop behavior.

"Spanking or hitting or shaking or shouting makes a child stop its behavior right now. And that traps the parents into behaving as if it were effective," Kazdin told the publication. "But in fact, it doesn't change anything. And so we know now from our science what is needed is to train the behaviors you want." He continued:

In fact, according to Kazdin, even moderate spanking puts a child at greater risk for things like academic dysfunction, as well as physical and mental health problems. Excessive punishment can even permanently alter a child's immune system — making them more likely to die of heart disease, cancer, and chronic respiratory disease as an adult.

Instead, the American Academy of Pediatrics (AAP) is a proponent of positive parenting, which involves guiding children toward better behaviors, according to TIME. Dr. Ben Siegel, a past chair of the AAP committee on Psychosocial Aspects of Child & Family Health, stresses that "discipline means to teach." Furthermore, very young children don't have the cognitive ability to understand or remember house rules until 2.5 or 3 years old, according to the publication. For this reason, Siegel recommends giving children choices in order to guide them to appropriate behavior, according to TIME. (So if your little one refuses to put her sweater on, try giving him the option to carry it. Or tell him he needs to finish his dinner before getting dessert.)

I have three little ones ranging in age from 18 months to 6 years, and the only bit of discipline advice I have to give is this: What works for one kid doesn't necessarily work for another. It's crazy to me how my three children can be raised in the same environment, yet respond so differently to certain forms of discipline. But that's exactly what I'm dealing with. Our oldest is devastated if he has to go sit in time-out. But our middle chid doesn't seem to care at all. And the toddler appears to be hitting her "terrible twos" a tad early. So that's fun.

Still, it's probably a good idea for parents to have this expert advice in their arsenals. Because chances are, they'll need at least a few tricks up their sleeves in order to figure out this discipline business. I know I did!

More Like This
Can You Help Your Baby’s Hair Grow?
Two Young Children Have Been Hospitalized Because Their Formula Is Out Of Stock
Spain Could Offer Up To 5 Days Of Menstrual Leave A Month & It'd Be A Game Changer
10 Lessons We’ve Learned From The Very Complicated Parents Of Grey’s Anatomy