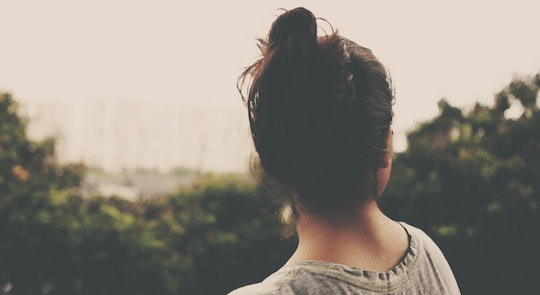 Here's the one thing you need to know if you're scared of giving birth: There's not one universal piece of advice that someone can tell everyone that will magically alleviate their understandable anxiety and send them into the delivery room or birth center or birth pool they rented and stuck in their living room completely zen. I know, that's a really annoying "one thing" to tell you, but I promise this will work out if you stick with me to the end. Because what I can do is tell you about my my births and my fears and how I eventually overcame them. So please read on knowing that I admit that I am one person, and I'm not the font of all obstetric knowledge or midwifery wisdom. But the fact that I am one person sharing her story will become pivotal a bit later. In fact, it's pretty closely connected to what I think is the one thing I think you should know.

There's always been an element of birth that can be scary. Historically, maternal and infant mortality rates have basically put birth on par with Russian roulette (even today, in Afghanistan, the maternal mortality rate is tragically near 19% and infant mortality is almost 12% ). Today, it's not so much the statistics that are scary in developed nations; statistically speaking, mothers and babies are safer now than they have been at almost any other point in history. The fear now, I feel, comes from the not knowing.

It used to be that when a woman had a baby, the midwife and probably her female family members would hurry over and either coach her through things or manage the family while she was getting her labor and delivery on. That's not to say you can't re-create similar circumstances today and, in fact, home births are on the rise. But in spite of this, 98.64% of U.S. births still take place in hospitals, so chances are you will not have this kind of set-up. In all probability, your birth is the first birth you will ever attend, and going into it, you will have basically no idea what childbirth actually looks like. We all think we do, because oodles of movies and sitcoms have some sort of delivery room scene, but we go into this completely life-changing experience essentially clueless. And when we figure out we're clueless, that's when the fear takes over.

Let me tell you a little bit about how this fear manifested in me, because it was all of a sudden and happened at a particularly inopportune time. You see, for my entire pregnancy, I wasn't afraid. I was pretty calm about parenthood and being pregnant and the baby and delivery. I'm a naturally laid-back person, good in moments of tumult or crisis; I remain calm and keep my head. Being pregnant didn't change that. I didn't freak out if I accidentally ate a cold cut or if I only did kegels three times one day instead of five. I was chill. Then I went into labor.

Unlike most women, my water spontaneously breaking is what started my contractions. (This is what they always show you on TV, but it tends not to happen much in real life — usually the water breaks way after labor has started— but it happened to me, so I guess a stopped clock is right twice a day.) At first, my contractions were 10 minutes apart and felt like period cramps. At that point, my calm, laid-back swagger was in full swing. I was like "Oh. This is doable. This is totally doable." But then stronger. Then 6 minutes apart. Stronger. 4 minutes apart. Stronger, stronger, stronger. 2 minutes apart for over 2 hours before I finally got an epidural, 14 hours after my water had broken. This, I thought, was not doable. This was hell. This was confusing. The fear came in with my contractions and just as strong.

People talk about the inherent body-mind connection that women have when they give birth. I think that can be true, but I also know, from experience, that it's not a given. Because my brain was like, "What the hell is going on down there? Body, requesting status report." and my body was like, "AAAAAAAAAAAAAAAAAAAAHHHHHHH! I AM DYING! HOLY SHIT, WE'RE ALL GOING TO DIE! YOU TOO, BRAIN! FUCK DYING HURTS! GAAAAAAAAAAAAAAH!" And then my brain would be like, "Whoa, Body, are you sure? Because I'm not picking up on any..." and body would interrupt with another contraction like, "BITCH WE ARE DYING!" And then my brain, who still knew we weren't dying would be like, "Body, you're hysterical. Literally. Calm down, just tell me what we should do next." And Body would be like, "SAY YOUR GOODBYES, BECAUSE WE ARE DYING!"

And even though my brain knew that it hadn't come to that, the complete lack of intimate knowledge about what was coming next was, in a sense, debilitating. Since that day, I know that this feeling has struck many a pregnant woman, sometimes when she's in labor, sometimes as she's pushing, and sometimes the minute she gets a positive pregnancy test.

I have to admit that I am amused by a double series of 180-degree turns at play here. On the one hand, even in the last few decades, the average expectant mother went from knowing very little about what was going on inside of her during pregnancy (much less the health or even the sex of her child) to being able to know the sex, weight, and facial features of their child. Thanks to procedures like CVS and amniocentesis, parents can know about the health of their child on a genetic level. Science is amazing. And yet, on the other hand, as we were developing and gaining access to all this (potentially lifesaving) information, we were simultaneously taking birth out of the community and now the process of giving birth is shrouded in mystery in ways it just wasn't in the past, at least not among women of childbearing age. I'm not saying this is a bad thing, in the long run (I myself had two hospital births) but for better or for worse, you can't deny that our familiarity with childbirth has taken quite a turn in the last century or so. So what do we do to illuminate these shadows?

Well, there are lots of things, and any one of them may be what's right for you to overcome your fear of getting your tiny homunculus out of you. You can read books, take classes, do yoga... Of course, none of those things may help you, either. Here's the one thing that helped me. Ready?

There are literally millions of women who have done this before you: listen to their experiences.

Talking to other mothers about their births, watching birth videos (OK, I'll admit, it's yucky at first but then it stops being yucky), reading birth stories, and having long conversations with my midwife (who's a mother of three) all immeasurably helped me overcome the fear that swept over me during my first birth, to the point that I did not feel any fear whatsoever during my second. I more or less needed to recreate a birth community like the ones women used to rely on back in the day. Yes, a big aspect of building those communities in the first place had a lot to do with a lack of options and, let us never forget, lived in the shadow of the fact that things could very easily go horribly, horribly wrong and quickly. Today, we largely don't fear for our lives and we largely don't have to fear for our lives (thank goodness), but fear is still a totally normal part of childbirth. I think looking back to birth as a communal activity, where women were acquainted with the experiences of other women, can help lift that fear for many modern women.

So listen to your fellow mamas, and be open to sharing their birth experiences. Listen to what happened and how they felt. Listen to stories about the kind of birth you would ideally like and stories of births that might scare you a little (or a lot). The wider the variety, the more you can find universals among all of them, which will guide you when your time comes. One "thing" — one piece of advice, one story, one fact, one brand of vodka — isn't going to eliminate a fear of giving birth. But listening to many individual voices may help.

More Like This
18 Pregnancy Announcement Ideas Break The Good News To Your Family
A C-Section Actually Doesn't Take As Long As You Think, According To Experts
Are Movie Theaters Too Loud For Pregnant People? OB-GYNs Explain
Ashley Graham On The “Fun, Organized Chaos” Of Raising Twins