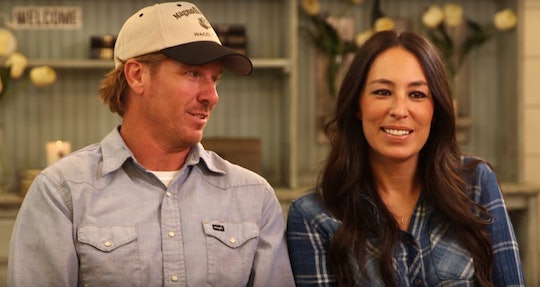 If we'll trust her with our shiplap, we'll trust her with our parenting tips, because as far as anyone can tell, the Gaines family really have their act together. Back in June, Joanna Gaines and her husband, Chip, welcomed their fifth baby into the family, a boy, named Crew. The couple had been transparent about the fact that, given it had been so many years since they last had a child, they were looking forward to freshening up on all the latest child rearing skills. It seems that they have, as according to her Instagram story, this is the super sweet way Joanna Gaines gets baby Crew to sleep, and it's as aesthetically perfect as you could imagine.

On Wednesday evening, Gaines posted a series of stories of herself walking her baby son to sleep in the backyard garden of their family home in Waco, Texas. She shared a photo of herself holding Crew, and then a series of the beautiful flowers and plants that she has in her backyard (and they're perfectly manicured, of course). She also gave followers a peek at her backyard shed, which looks more like a library, featuring walls of amazing books. (For the record, it looks like a scene out of Beauty and the Beast.) Her daughter, Ella, was seen browsing the shelves, and then walking back with her mom and little brother into the house.

This is not the first time that the Gaines family has shared a sweet, summer backyard family moment. On July 2, Joanna shared a photo of her daughters, Ella and Emmie, holding their new baby brother underneath strings of bistro lights that hang across the family's yard, Country Living reported. "Stargazing," Gaines wrote on the sweet pic. Fans immediately started responding with kind words, saying things like: "And Crew would say 'Just love the comfort of my sisters arms and both of their voices.' Are those stars I'm looking at?” or "Such a sweet, sweet moment here."

Back in April, Gaines opened up to People about what it was like to find out she was having another baby, somewhat unexpectedly.

“Since it’s been over eight years since I was pregnant with my daughter, I joke with my friends that it feels like it’s my first time being pregnant,” the magazine reported that Gaines wrote in a letter to fans ahead of the Fixer Upper finale. “The best thing about all of this is the excitement that my kids have shown for their new baby brother. Since I had our first four babies so close to one another, none of them actually remember me being pregnant."

In another letter she penned to fans on her blog, Gaines opened up about the challenges of being a working mom, and how everyone needs reassurance that they are, indeed, doing enough. She wrote:

As a working mom, it’s the hardest when my kids grab onto me as I’m walking out the door and say, 'Mommy please stay home!' I don’t want to ignore that, so I always explain to them that being with them is my favorite thing in the world. I explain that I have to work just like they have to go to school. I also let them know what I’m doing at work that day—whether it’s filming the show or going into the office—and what time I’ll be home. Taking a few seconds to let them in on this other huge part of my life has really helped them understand that mom and dad have a big job to do.

A big job indeed, and whether that's being an iconic duo or raising kids that are just as sweet, the Gaines' prove that there's nothing they don't do with style.