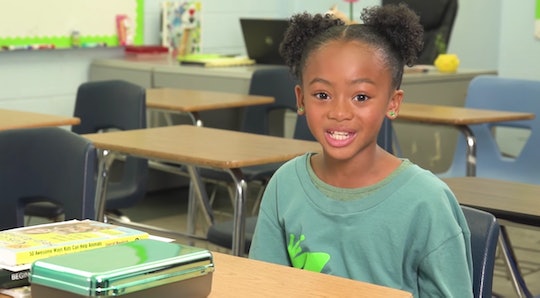 Eleven-year-old actress Faithe Herman is fresh off a SAG Award win along with the rest of the This Is Us cast — and she's not wasting any time when it comes to using her growing platform. This Is Us star Faithe Herman and PETA recently teamed up to share advice for parents whose kids don't want to participate in animal dissection at school. The animal welfare organization produced a video starring Faithe, and the information she shares highlights the importance of standing up for what you believe in.

In the video, which PETA (People for the Ethical Treatment of Animals) exclusively shared early with Romper, the young actress sits in a classroom wearing a "Cut class, not frogs!" sweater. Faithe, who plays Annie Pearson on This Is Us, tells viewers that she just learned about the truth behind classroom dissection, which is "definitely not cool. It's actually really gross, and mean."

Faithe explains in the video that she loves animals — "So why would I cut them open?" she wonders. According to PETA, animals typically used in classroom dissection are frogs, cats, birds, and fetal pigs. And as the National Anti-Vivisection Society (NAVS) reported, 12 million animals are estimated to be killed for dissection in the United States each year.

Fetal pigs are typically cut out of their mothers' wombs at slaughterhouses, before the mama pigs are turned into pork and bacon, according to the American Anti-Vivisection Society. And when frogs are taken from the wild, it can disrupt the balance of natural ecosystems, according to The Science Bank. And as the outlet adds, breeding frogs for dissection isn't much better, as breeding promotes disease among the frog population. Not to mention, The Science Bank also explains that the formaldehyde used to preserve the dead animals has been linked to respiratory diseases in humans.

"Wait, hold on," Faithe says pointedly, after describing the methods used to get the animals to your science classroom (followed by a well-timed record scratch sound effect). "You didn't actually think people were just digging around the woods, collecting millions of animals who died naturally so you could cut them open in class, did you? Seriously? And people tell me kids are gullible ones," Faithe continues. Her message is blunt, but if an 11-year-old can grasp the concept that there's no need to kill animals to learn about their anatomy, surely an adult can, too.

If your child is going to be faced with dissection day at school sometime soon, Faithe and PETA have the perfection suggestion for an alternative activity: virtual dissection. "School is supposed to be learning, not killing, and I'm pretty sure we can learn way more about science from an iPad than from cutting up an animal's body," the 11-year-old actress explains. "There's even cool 3D software now that helps you learn all about biology without harming a single animal."

PETA suggests sharing these resources with teachers — not only is opting for a virtual dissection more humane, but it will also help schools save money. "Think about it: How can it make sense to buy dead animals year after year, class after class, when a computer program can be purchased once and be used every year?" PETA says.

"So how about you just say 'no' to dissection?" Faithe tells viewers at the end of the video. "Then, hopefully, by the time I'm your age, it won't even be on the table."

Faithe is clearly a huge animal lover, and it's impressive that at just 11, the This Is Us actress is already questioning and protesting against things she sees are wrong. Hopefully her advice is helpful for parents whose children don't want to hurt animals, and it will be exciting to see where Faithe takes her passions next.