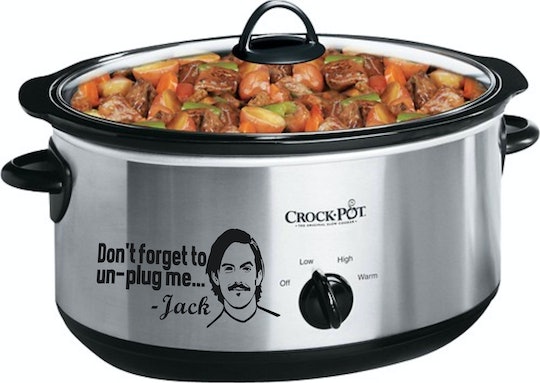 Guys, There Are 'This Is Us' Crock-Pot Decals So Jack Can Live On In Your Slow Cooker

If you watch NBC’s hit series This Is Us, you’ll never look at a Crock-Pot the same way again. No matter how much you tell yourself, “it’s just a TV show," the emotion this show and its characters stir within you are too strong to control. When it was revealed that your beloved Jack suffered a death by Crock-Pot, your favorite kitchen appliance was reborn. Jack’s death plot line has become a cultural reference now, and if you’re a crockpot loving fan of the show, these This Is Us crockpot decals are a must.

If you watch the show, you know that the cause of Jack’s death was a mystery, and the anticipation surrounding it was intense. When the cause of his demise was revealed to be a fire sparked by faulty Crock-Pot wiring, people went into a panic about their slow cookers. Crock-Pot had to do some major PR and marketing to get back into the public’s good graces, like airing this #CrockPotIsInnocent Super Bowl commercial featuring Milo Ventimiglia eating chili from a Crock-Pot. Well, it seems to have worked.

Rather than freaking out about their slow cookers, people are now gleefully decorating them with decals, and for most fans, these This Is Us decals are just too hilarious to pass up.