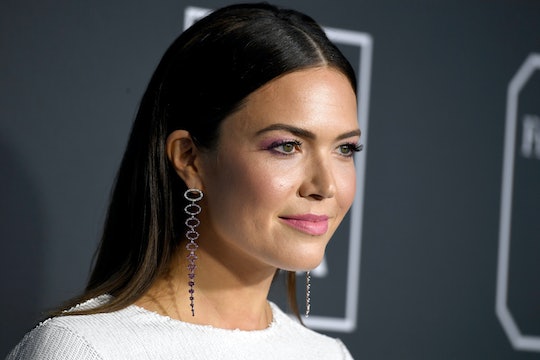 'This Is Us' Taught Mandy Moore An Important Parenting Lesson

If you're not familiar with the hit NBC series This is Us, then you're seriously missing out. (I'm probably not the first person to tell you this.) The show features the story of Jack (Milo Ventimiglia) and Rebecca Pearson (Mandy Moore) and their three children — Kevin, Kate, and Randall — over the span of four decades. This heartwarming and heartbreaking series has managed to capture the hearts of millions, and Moore's portrayal of the unwavering family matriarch has a lot to do with that. Although she isn't yet a mother herself, apparently This is Us taught Mandy Moore an important parenting lesson.

On Thursday, Feb. 7, Us Weekly caught up with Moore at the Television Critics Association’s Winter Press Tour. And apparently, the Golden Globes-nominated show has given the actress some insight into would parenthood is like. "It’s shown me that maybe I am not as patient as I thought I was," she told the publication. "But maybe it will be different when it’s your own children." Portraying a mom of three on the small screen has also taught Moore an important practical parenting skill: How to change a diaper. Which is something that will definitely give her a leg-up in the event she does have children of her own one day.

Moore's interview with Us Weekly seems to echo a previous conversation with Parents — that playing the part of a mom has given her a fuller appreciation for mothers. And particularly moms of multiples. "I have unending respect for mothers in general but mothers of multiples specifically," Moore told Parents. "This is a woman who's doing it pretty much on her own. She has a husband who had a great deal of responsibility at the office and wasn't home to help out as much as I think she was expecting him to, which may have created tension in their marriage. She added:

To think that she was doing this really without any help is beyond admirable. I don't know how women do it.

Even though Moore isn't currently a mom, it's definitely something she's hopes will happen for her down the road. "I am so excited to hopefully be a mother one day," she told NewBeauty in April 2018. "I feel like I have a little bit of a head start with [This Is Us.] I’m getting practice with babies and toddlers and 10-year-olds and teenagers and adults — every chapter of life. I have had much more experience dealing with the bigger issues they all have to contend with. I hope that is in the cards for me, sooner rather than later."

As E! Online reported, Moore tied the knot with musician Taylor Goldsmith in November 2018. (This is actually Moore's second marriage; she was previously married to singer Ryan Adams.)

Who knows? Now that Mandy Moore has found the right guy, perhaps motherhood will be just around the corner for her. And if it is, she already has the important skill of diaper-changing under her belt — along with the countless other lessons she's learned through portraying Rebecca Pearson on This is Us.

More Like This
7 Baby Name Generators To Try
10 Baby’s First Christmas Outfits Cute Enough To Save For Their Kids
We Have To Talk About This Fish That Will Pat Your Baby's Butt Until They Fall Asleep
Can You Give A Sleeping Baby A Breathing Treatment? Experts Explain