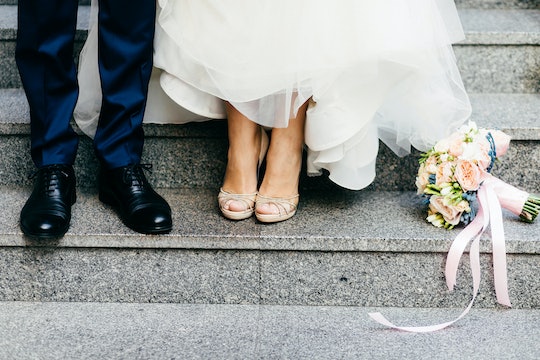 This Is What A Year Of "Trying" Looks Like

For the first two years of marriage, I resented implications that we would immediately become pregnant. I disliked that every time I said, “guess what?” on the phone, I had to immediately follow it up with “I’m not pregnant,” and no matter what my exciting news was, it wasn’t very exciting because it was not a baby.

This became a bit of a soapbox for me, honestly — I worked extra hard to have exciting challenges and stories. I wanted to talk about running my first half-marathon, and buying a cat, and taking a trip to Europe… I wanted to not need a baby to be exciting.

That being said, we did eventually start trying to have a baby, or as one friend’s doctor described it, we “stopped preventing a baby.” It seemed like such an intention though: we call it trying, the way we talk about prying a lid off a pickle jar. It takes effort, and it becomes something to talk about, at least quietly. My two closest friends knew we were “trying,” though I remained oddly quiet about it with family. It seemed like I had just gotten them to stop asking if I was pregnant. It’d be odd to force them to start it up again. I figured, like so many of us do, that I’d have good news for them in a few months.

My husband and I are like so many other couples who do not conceive immediately but don’t know why. We are in our late 20s, generally healthy, and we scaled back almost all caffeine and alcohol use, despite being total coffee fanatics. I bought a double pack of prenatal gummy vitamins that I hid before people came over to the house. Then I bought another double pack. I’m on my fifth bottle now.

The pivot is where I went from anxiously anticipating a pregnancy to anxiously worrying about infertility.

The first three months of trying were marked by impatience but not worry. The cycle of placebo effects meant that for the second half of my cycle I took every cough, every momentary queasiness, and every craving as a kind of sign. However, despite impatient pregnancy tests that always were obstinately negative, it did not happen. Around month five, I experienced the pivot.

I’m sure some women pivot after less time than I did, and others require a year or more of trying to get there, but the pivot is where I went from anxiously anticipating a pregnancy to anxiously worrying about infertility. I asked my husband to get a semen analysis, just to ensure that everything was good with him. I wanted to rule things out, and it takes so long to schedule doctor’s visits, I figured that by the time it was done, we might be pregnant and I’d laugh at myself for prematurely getting information. It wasn’t needed — I know many people don’t consider testing until a year in — but I needed something that we could control, some new information.

All this time, I didn’t tell anyone that things might not be going so well. The two friends who knew I was trying probably started to sense that I was still not pregnant and so things weren’t happening quickly, at least, but they didn’t talk to me much about it. I’d picked friends without kids and who weren’t trying, so they thought this was just part of the process. In the meantime, month six of trying passed. I had been binging audiobooks about trying to conceive (TTC) and parenting, and in a fit of impatience I bought one of those little square fertility monitors that require you to test your urine every morning to ensure you are ovulating.

While I waited for the fertility monitor to arrive, my husband went through the awkward experience of getting a semen analysis. The monitor arrived. When friends came over, I now had to hide the monitor and the prenatal vitamins. Even more than I didn’t want people asking if I was pregnant, there was an overwhelming feeling of not wanting to talk to anyone about how I was not pregnant, how this wasn’t happening for me.

The monitor was a pain but at least felt pro-active, an immediate task to do each morning before I was out of my bleary-eyed state. The first cycle proved to be stunningly regular, exactly the way one would expect from the phone apps and generally given 28-day-cycle information. Right around the time that I was celebrating having ovulated, my husband got a call. His semen analysis had come back odd: plenty of sperm, plenty of motility, but something we’d never heard of (abnormal head morphology). It was explained as a condition that meant the sperm couldn’t penetrate the egg.

Month eight is a tough time for me, since I cannot push past the feeling that if things had worked out, my hypothetical baby would be almost ready to be born.

The diagnosis threw us like someone suddenly hitting the brakes. We’d been pushing forward, making progress, and this meant that something was actually wrong. So we did more research: isn’t that just the way with trying? Each set-back results in more research, more interventions in our lives, the next step.

For us, the next step was a follow-up analysis after making even more lifestyle changes (no alcohol at all, less coffee, specifically for him rather than for me). We’re in that limbo now, since they say it takes three months before a new analysis will offer helpful information. Month eight was a tough time for me, since I couldn't push past the feeling that if things had worked out, my hypothetical baby would be almost ready to be born.

We are still “not preventing a baby,” but as we reach the one-year mark, we’ve come to another pivot point. Our second analysis came back the same, so we will soon be talking to a doctor more specifically about the likelihood of having a child biologically. In the meantime, we’re exploring other ways to start a family, trying to get to know the domestic infant adoption programs as well as foster care in our state. These were always options we were considering, but given that being younger is often helpful for conception and pregnancy, we had focused on that almost exclusively in our research and preparation. I know that adoptions will be a positive path as well, if that is where we end up, but I cannot help feeling like I’m starting over: wrapping my head around an entire different type of “trying” and a bunch of new expectations.

One hopeful feeling I’ve gained in all this is that we are training: when we do have a child, however he or she enters our lives, we’ll have to pivot all the time to keep up with the ways they grow and change. This is training, but it certainly isn’t easy.