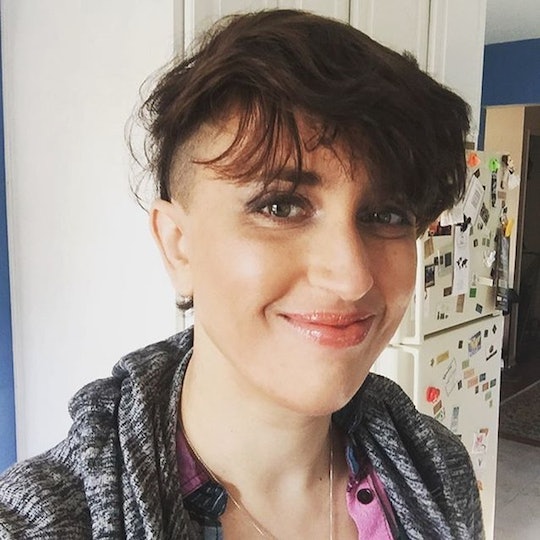 This past summer, while I was visiting my son, I discovered that he knows what a "birth mother" is. I wasn't sure that he knew, but it turns out he does. We were filling up water balloons in the park, standing in a long line at a water fountain. I struggled to keep the balloons intact as I filled them up, trying not to break them with my fingernails or lose all the water as I tied the stem. I was sure I'd be seen as a failure in Leo's eyes if I screwed up water balloons. But he looked at me and said, "I want a yellow one. You take a yellow one. Guess what? We have the same color. And guess what? I grew in your tummy and you're my birth mother." It all tumbled out of him at once, very simply, very straight-forward, as if he'd known this truth all this life. Leo is 4 years old. I placed him in an open adoption in 2012, after getting pregnant while being broke, single, and an artist. It remains one of the better decisions I've ever made.

We hang out once a month or so. Leo's dads (yes, plural) used to live a 45-minute subway ride from me; a few months ago, they moved to a new apartment that happens to be walking distance from my home. Family time with them is casual and straightforward: we catch up on each other's lives, while my increasingly gigantic son tries to get our attention approximately 30 times a second. He does typical 4-year-old things, like saying "no" a lot and making animal noises and giggling at burps. But when the five of us sit at his parents' dining room table — Papa, Daddy, Mariah, Mariah's boyfriend Patrick, and Leo — we are not a typical family at all.

At our most recent visit, Leo answered the door all by himself. I did a brief double-take when the door opened and no one was at my eye level, but honestly, he's getting close. He's growing faster than I can keep up with. Patrick was already there, glass of wine in hand. "Mariah and Patrick, you wanna come see my room?" he asked. And of course we did. (I didn't realize he knew Patrick's name, though.) We head upstairs, and he briefly shows us his dads' room: "You could jump on the bed, but you might hit your head." In Leo's room, we learn how to make a house out of blocks. "A window is a square, so we need some squares, and the roof is a triangle, so we need some triangles." He knows exactly how he wants his house and asks me to get him the blocks he needs. I accidentally knock a few blocks over on the roof, but he forgives me quickly.

Leo throws his arms around me over and over, telling me not to go. He's never done this before. I try to play it cool. I try not to worry that he'll come to see me as someone who's always leaving him. I try not to let on that my heart is exploding at the fact that my son wants me to stay, and I tell him he can come meet my kitten sometime. I ask him if I can kiss him on the cheek. "No! But give me a kiss on the chin." And I do.

Dinner's ready, or at least the appetizers are. Patrick and I sit with Leo and munch on okra while his dads keep at the food. Leo is about to start pre-kindergarten, and he laughs at the thought of me and Patrick picking him up from school: "Everyone would be like, 'Who's that?!' And I'd say, 'That's Mariah, my birth mother! And Patrick!'" I try not to be sad at the thought that no one would know who I was if I picked up my son from school, but I'm simultaneously tickled by Leo's lack of a need to assign an identity to Patrick besides just "Patrick." Leo goes on to joke that Patrick and I would be the oldest students there. "And they'd be like, 'No, you guys can't be students here! We don't teach grown-ups!'" It's a pretty coherent joke. I laugh. Patrick tells Leo that he's probably part giant, and I have to agree.

Dinner is served. It's delicious, per usual. Leo's dads and I compare notes about our recent travels: their vacation to Alaska, my out-of-town performances of my solo show (which, incidentally, is about becoming a birth mother, and which they saw the very first performance of). They tell me about their decision to send Leo to a Catholic school, which involved calling the school to verify that they were gay-friendly. Leo's Papa tells me about the classes he's taking and the leave of absence he's taking from his theater company until he's finished (we both do theater, though that's not how we met). In many ways, it's just like any other amicable family gathering where a 4-year-old is present and refusing to finish his food, requesting ice cream instead.

Post-ice cream, Leo puts on an Australian children's show that his Papa openly despises (Hi-5). We all do the animal dance from the opening sequence together. Somehow, this transitions into me and Leo crawling around on the ground and barking like dogs; his Papa snaps a video. Leo asks me to grab him by the armpits and drag him around the floor, and I do. In the past, he hasn't initiated much physical contact with me, so this is a treat. Every 10 or 20 seconds, he tells me to stop, and I do; then he asks me to start again, and I do. We do this over and over again. He giggles and giggles.

I battle the birth mother's equivalent of "survivor's guilt" with every visit. Openness guilt? Luckiness guilt? Why should I get to see my son all the time when other birth parents can't? But maybe the luckiest part of all is that our visits are so casual.

Eventually, Patrick and I have to go; we have to return some house keys to a friend and go feed our kitten (whom Leo is eager to meet). Leo throws his arms around me over and over, telling me not to go. He's never done this before. I try to play it cool. I try not to worry that he'll come to see me as someone who's always leaving him. I try not to let on that my heart is exploding at the fact that my son wants me to stay, and I tell him he can come meet my kitten sometime. I ask him if I can kiss him on the cheek. "No! But give me a kiss on the chin." And I do. Then he shows me and Patrick out.

Among women who've placed their children for adoption, I'm an anomaly. Even though some level of openness in adoptions has increasingly become the norm, it's still a fairly new concept, and women who placed in decades past have rarely been so lucky. And according to my social worker, even among open adoptions, most families are interested in more like one-to-two visits per year, not per month. I know I'm freakishly lucky. I battle the birth mother's equivalent of "survivor's guilt" with every visit. Openness guilt? Luckiness guilt? Why should I get to see my son all the time when other birth parents can't? But maybe the luckiest part of all is that our visits are so casual. They're not loaded or formal. We don't try to curate images of perfection for each other. I feel comfortable admitting to them when my own life has gone crazy, and they're open with me too. It's simple. It's natural. It's family.

That doesn't mean it's always easy, or that I never get sad. For years, I didn't think Leo knew who I was, or cared whether I came or went. And in the future, he may very well decide that he doesn't. But for right now, especially for having had to basically define our family from scratch, I'd say we're doing pretty darn good.