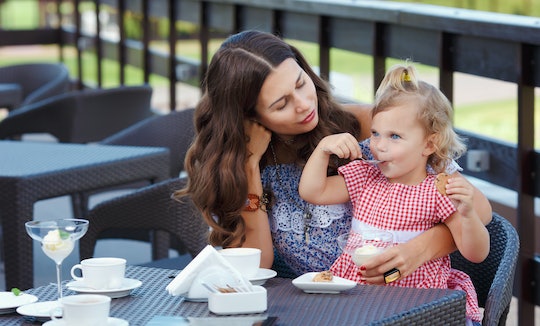 Actually, This Is What You're Doing When You Give In To Your Kid's Whining

Seriously, nothing gets to me quite like when my kids whine. I know, in my head, that whining is a normal and appropriate developmental behavior, but the annoyance of it all really takes precedence in the moment, doesn't it? It's hard not to give in sometimes — after all, there comes a point when you'll likely do anything to make it stop. But, it's important to remember what you're doing when you give in to your kid's whining, because the last thing you want to do is anything that will prolong the whining phase of their lives.

As Parents noted, whining is often the only way that young kids can express themselves when they're tired, cranky, hungry, uncomfortable, or just don't want to do something. It's basically a crossover of the crying they did as an infant, and the verbal expression they're learning to do now. They just don't always have the skills at 3 or 4 years old to express themselves articulately at moments of frustration and distress. (Let's face it, neither do most adults.)

But while giving in to whining might end the problem temporarily, it only perpetuates it in the long run, mentioned Parenting. If your child learns that you can eventually be broken, your whining problem will likely begin to get even worse.

Catherine Pearlman, PhD, LCSW, Assistant Professor at Brandman University and founder of The Family Coach, explains to Romper, "When parents give in to whining, they are reinforcing the behavior. Providing a benefit [your attention, and the subsequent reward of whatever they were asking for] will ensure that the behavior is repeated because it’s effective."

If parents simply ignore the whining, children will immediately see that their whining has no effect, Pearlman continues. Parents should instead try to praise their children when they are not complaining or whining. "Shower kids with attention when behaving well," she says, "ignore them when whining, and soon, children will find more desirable ways to accomplish their little goals."

Of course, this is all easier said than done, most of the time. But, it's likely worth more of an effort on your part as a parent. According to Dr. John Mayer, Clinical Psychologist at Doctor on Demand, there can be major consequences if you constantly give in to your kid's whining. "Parents can unknowingly prolong developmental advances, such as speech development, socialization, communication, control, and understanding of emotions," he tells Romper.

Giving in to whining might be the quickest and easiest way to end it in the moment, but likely, you'll then be dealing with issues related to whining for some time to come.

Being consistent in trying to ignore whiny behavior is a good way to start, as is praising your kids when they do use regular, polite voices to ask for what they want or need. A little nudge, like reminding them that whining voices are difficult to understand, and assuring them that you'll wait until they're ready to speak regularly can also help.

Everyone whines — parents, too (though you likely do so in the privacy of your own group texts) — but kids are always watching and listening, so it's vital to be mindful of your own whiny behaviors as well. Just watch — your kid might even praise you the next time you use a nice voice instead of whining about how the barista got your coffee order wrong.