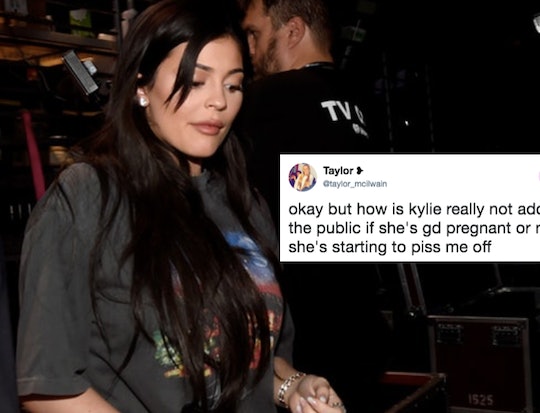 Listen, everyone is entitled to their own privacy. Yes, even if they're rich and famous — and that includes a certain young beauty mogul who has been avoiding rumors like it's her job. And once you learn why Kylie Jenner reportedly isn't talking about her pregnancy rumors, you'll probably start to think that avoiding rumors actually is Jenner's full-time job. And it kind of is, isn't it? After growing up in a famous family surrounded by cameras and headlines, it makes sense that the 20-year-old would want to steer clear of any unwanted attention while she's allegedly pregnant.

According to People, an anonymous source said that Jenner won't be addressing any rumors about her pregnancy until she actually gives birth her alleged baby — yes, the baby-to-be we still don't know even exists yet. Per People's source,"Kylie isn’t going to publicly address her pregnancy until she gives birth. She’s not doing any public appearances and just wanted to take six months off."

As of yet, neither Jenner nor her older sister Khloe Kardashian — who is also reportedly expecting her first child — have addressed their respective pregnancy rumors.

Jenner is totally obliged to handle this time in her life in whatever way she wants to, but a lot of the beauty mogul's fans weren't too happy with this latest development and have since expressed their annoyance and anger on Twitter.

"If Kylie didn’t want to be in the spotlight then she should’ve done this a long time ago," one fan wrote, with others agreeing and piling on. It's likely that a lot of Jenner's fans are just curious about her reported pregnancy because they look up to her and admire her, but that doesn't mean that all the comments being made about Jenner's wish to lay low are valid.

Many fans are accusing Jenner of staying out of the spotlight because she's insecure about her changing body. However, the source only told People that Jenner wanted to take some time to herself, telling the publication, "Kylie wants to disappear and be out of the spotlight and focus on her health and happiness." That's incredibly important as well and Jenner should be able to take a step back if she wants to. And the focus shouldn't be on her changing body, should these rumors be true.

However, it would also be pretty understandable if Jenner was a bit self-conscious about her growing pregnancy bump. According to another anonymous source who spoke to People, "Her body is changing and she’s very self-conscious about it." The source went on to say that Jenner has "always been insecure that she’s not as curvy or pretty as her sisters." And that would makes total sense.

Unfortunately, the world is pretty obsessed with image and bodies, and especially those bodies belonging to women. Whether it be abortion rights, body positivity, or anything in between, it seems that the conversation surrounding women's bodies is often discussed by everyone but women themselves.

So it's totally normal Jenner is reportedly feeling a bit self-conscious about her pregnancy body. She is likely under enormous pressure to look a certain way, and it can't be easy to have to live with that pressure on a daily basis. But, the thing is, a woman's body changing while she's pregnant is one of the most natural, beautiful things in the world.

Pregnancy changes a woman's body, and Jenner might just not feel comfortable with all that's happening right now — and that's totally fine. After all, while Jenner and boyfriend rapper Travis Scott are reportedly expecting their first child together, neither one of them has confirmed anything, nor should they have to. It's their life, and it's Jenner's body. End of story.