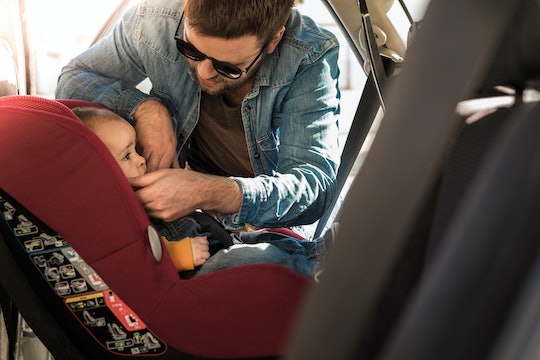 This Is Why Your Baby Hates Being In Their Car Seat, According To An Expert

You're driving along, happily singing with Britney, your child tucked safely into their ultra-posh car seat. Britney's loneliness is killing her, but suddenly, your kid's screaming and crying like their car seat is killing them. If this is a common scenario, you've probably wondered why your baby hates being in their car seat, and you're not alone.

I can recall the exact moment my daughter decided that the car seat was a place of evil with straps of doom and was hell bent to get out of it as quickly as humanly possible. She was just over 13 months old, and she'd become a truly adept walker. In fact, she was running everywhere. To her, that car seat represented a loss of the freedom she'd gained on two feet. She'd buck and wiggle as soon as it even looked like she might be strapped in.

It was really draining. At the time, I had to bring her around with me pretty much everywhere because I was in school, and that just necessitated a lot of trips in the car instead of her preferred method of transportation — running away from me. You may be familiar with this problem. So, why does your baby hate being in the car seat? I asked an expert.

Sara Lewis, a pediatrician in Massachusetts tells Romper, "It depends on how old the baby is why they may hate their car seat. If they're really little, it's probably a comfort issue. Check to make sure that the sunlight isn't in their eyes, that they don't have a diaper rash that's being irritated, and that the straps are comfortable and not rubbing anything. Infants have a hard time relaying what's bothering them, so it's all on us. Sometimes, though, newborns and infants just prefer being held, so they're just not going to want to be in the car seat."

She says for older kids, it's likely ants-in-the-pants syndrome. They have all this energy and will to move, and that car seat clips their wings. They can't get all their wiggles out when they're in a confined space. Lewis suggests helping them out with distractions. Things like toys they can only have in the car seat, games, or even an iPad can distract them from the fact that they're going to be strapped in for a while.

However, there is one group of kids that may have it harder than others when it comes to car seats. Lewis says, "For kids with special needs, it's really hard to tell unless they can tell you what they're feeling. Car seats tend to be very sensory-deprived, so you might want to look into some adaptive toys and special adaptive car seats to help them get comfortable and stay comfortable. For my son (who has autism), he needed additional support from his car seat, and thankfully, those devices do exist for families like ours."

My own son, who is on the spectrum, used adaptive devices on his straps from 15 months on. He still hates his car seat, and he's just in a booster, but his reaction was never as extreme as his sister's, let me tell you. If I wasn't already deaf, she may have succeeded in making me so. Thankfully, Lewis reports that most kids grow out of hating the car seat all the time to just generally getting irritated and bored in the way kids are prone to do. This too shall pass.