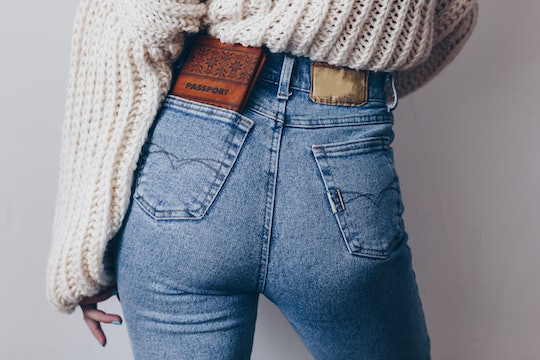 This Joke We Make About 'Mom Jeans' Is Dumb AF

I was a lot of things before I became a mom. But mostly, I was a d*ck. That's because I threw around the term "mom style" to describe things I thought were uncool: extremely high-waisted jeans, shirts with tiny bead appliqués, sensible and supportive shoes like Crocs. I used it to describe things I found ugly or out of touch with current trends, the implication being that someone with children doesn't really care about how she looks anymore. I had no idea how cruel it was to uphold this idea.

When I was younger, I thought "looking like a mom" was by far the worst thing you could say to someone with regards to their personal style. It's a statement that not only says you look like crap, but that you look that way because you don't prioritize your personal appearance. "Looking like a mom" evokes images of women with dirty shirts and pajama pants on — disheveled and slightly deranged-looking, as if their little ones had taken the breath of life out of them.

It took having a child to hear the words fall out of others’ mouths and realize how deeply problematic this term is. Now, I try to avoid making jokes about mom jeans and the like — not just because these jokes are cruel, but also because they're not even true.

Our society has an odd sort of double-helix-shaped totem pole of expectations for moms. One side expects us to be perfect, and beautiful, and without fault. The other side tells us that we are unwanted and undesirable, that we are used cars with worn-down tires and that we might as well throw in the towel on ourselves.

Being a mom is incredibly challenging for many reasons, but by far the most difficult part of being a mom is dealing with society’s definition of what a mom should be. I'm supposed to sacrifice everything for my child, and I should do all of these things while flawlessly maintaining my pre-baby body — otherwise, my partner might not want to stick around.

Just because you've given birth doesn't mean that you automatically look schlubby and ill-kept. In fact, a ton of women have managed to procreate and — gasp! — still look cute.

Jokes about mom jeans and Crocs and scrunchies and the like are twofold. They put pressure on moms to live up to unfair expectations, while simultaneously demeaning us when we fail to live up to them. After all, no one wants to be the mom in the minivan with curlers in her hair, looking hollow-eyed and tired and sloppy while picking up her kids at soccer practice.

But just because you've given birth doesn't mean that you automatically look schlubby and ill-kept. In fact, a ton of women have managed to procreate and — gasp! — still look cute.

In truth, it's just as easy for moms to maintain their sense of personal style as it is for women who don't have kids. If you tracked my appearance during a given week, you would find that I vary between looking grubby and not-too-shabby every other day. One day on, one day off. You know, just like normal people. Some days I look like hell, and I have a kid. Some days I look great, and I have still have a kid.

The next time you consider using the term "mom hair" to describe an unfortunate hairstyle, or "mom jeans" to describe a denim cut that's unflattering, think twice about it.

The way anyone looks on a given day has little to do with whether or not they once housed a baby in their uterus. It has everything to do with their personal sense of style and the confidence they need to pull off their wardrobe, as well as whether they have the time and money to put a stylish outfit together. And those things are not exclusive to non-moms.

So the next time you consider using the term "mom hair" to describe an unfashionable hairstyle, or "mom jeans" to describe a denim cut that's unflattering, think twice about it. Think about your cute-ass friend who happens to have a child. Think about your other stylish friend who also happens to have a child. Hell, peruse Instagram and see how many amazing, stylish people also have children. And also, think about your child-free friends who look like hell on a regular basis.

There you have it: there is no such thing as 'mom style.' There is sh*tty style and great style — and you're probably sitting on either side of the fence, whether you have a kid or not.