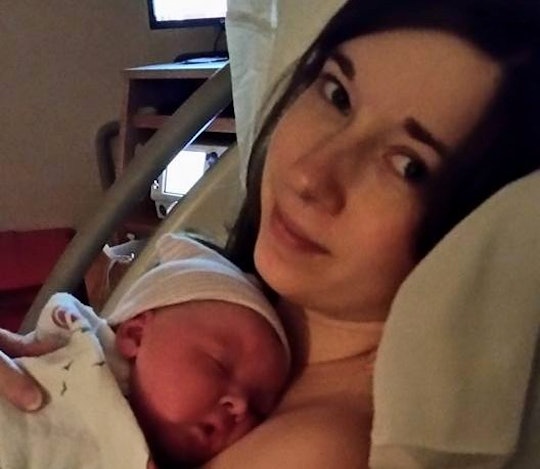 This Joke We Make About New Moms Is Not Just Annoying, It's Wrong

When I became pregnant with my first child, most people reacted to the news with a mixture of happiness and unsolicited advice. One joking piece of "advice" I often received from family and strangers was to enjoy my freedom while I could, because it would be gone before I knew it.

Over the past six years, I've had three kids, and I've continued to hear various versions of that same joke. Friends ask how the "freedom" feels when I have a night out without my kids. Grandparents will come over to babysit and remind my husband and I to enjoy our limited moment of freedom while we can. In a way, I totally get it, because obviously having kids means you have to sacrifice a lot of your personal time, but to be honest, the joke we make about parents losing their sense of freedom is actually really damaging.

When I was young, scared, and pregnant, this joke haunted me all the time. The implication was that my freedom was going to be taken away from me and replaced with a sense of familial burden. My baby was a reason to be happy, sure, but it was also a reason to mourn. My life would essentially be over, my freedom gone for at least 18 years. I was frightened that I would no longer be able to enjoy my life, no longer be able to have fun. I was worried that I would never leave the house alone again.

When I became a mother, however, I understood more fully the context of the joke. It was true that my life was no longer solely my own, because a large part of me belonged to my children. The boundless freedom I enjoyed in my pre-child life was, most definitely, a thing of the past. I was tethered to them and always would be, at first literally and then figuratively. And yes, for the next 18 years, I wouldn't be able to leave the house without thinking of my children. For the rest of my life they would hover in the forefront of my mind, no matter where I was. This was simply part of the deal.

Now that I have three kids, it is insanely hard to orchestrate a date night. Everything from running errands to going out to eat has become infinitely more challenging. When I think about going to school for a master's degree, it is not the work I am afraid of, but the daunting scheduling that would be required to make it a reality. Though travel and going out and achieving career goals and continuing my education are all still possible with kids, they are harder. That is simply a fact.

However, when people joke about my lack of freedom, especially in front of my children, I deeply resent it. Such comments imply that my children are a burden, when they are anything but. While it may be harder to travel and go out with friends, I now have a deeper appreciation for those experiences and I also have a reason to be happy when I return. There is no better feeling than coming home to my children, and I don't ever want them to think otherwise. I don't want my children to think my life suffers in any way because of them. I don't want them to wonder if there is any shred of regret in my heart because of them. There isn't. There never will be.

My children have not detracted from my success. They have been the reason for it. And in truth, they have given me more freedom — the freedom to chase my dreams, to enjoy my life, to be the fullest version of myself.

While I may have to work harder to get ahead in my career or come up against logistical obstacles when trying to continue my education, the truth is I wouldn't have the drive to go after those goals without my children. They inspire me to be the best version of myself, to reach for more than I ever would have on my own. They have not detracted from my success. They have been the reason for it. And in truth, they have given me more freedom — the freedom to chase my dreams, to enjoy my life, to be the fullest version of myself.

I think the joke that parenthood robs you of your freedom isn't just messed up — it's inaccurate. It makes having kids seem like a disadvantage, and it tells children themselves that their parents' lives would have been better without them. I might not be able to leave the house by simply putting my shoes on and walking out the door, but my life is not worse because of that fact. I had the freedom to create the life I wanted, the one which includes my children, and that is the freedom I value most.

More Like This
30 Adorable Baby Halloween Costumes, From Animals To Avocados
Experts Explain Whether It’s Safe For Your Baby To Sleep On Your Chest
The Difference Between The PICU & The NICU
43 Awesome Toys For 18-Month-Olds