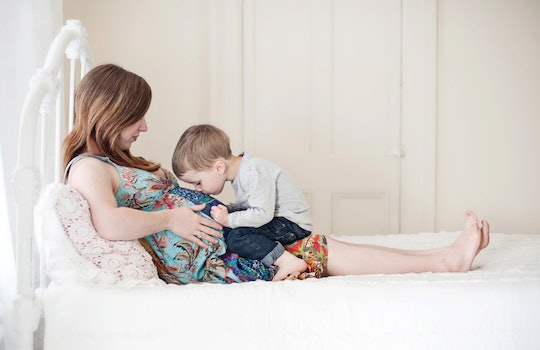 I Hate This Joke About Pregnant Women

I was never an overly emotional person until I became a mother. I had been warned by older, wiser women that having a child would change my ways, and once I became pregnant, the bar for what made me emotional took a quick nosedive. The joke I often heard about this new emotional state was that once you got pregnant you would cry over anything. I shrugged it off at the time, but looking back at it now, that joke we make about pregnancy hormones and “crying for no reason” is actually really screwed up.

I didn’t really think it would happen to me. I didn’t think I’d become a big pile of mush while watching Proctor & Gamble ads about Olympic moms, or cry openly during Super Bowl commercials because everything was so damn poignant. I was working in a retail clothing store, and I'd go over to the bookstore on my breaks and come back with beautiful children’s books that my co-worker, also a mom, and I would read during lulls in the day. We would both cry.

I tried to hide my newfound emotional side because I felt stupid for crying all the time. It wasn’t a trait I was supposed to embrace. It was something to be mocked. The stereotype is that pregnant women cry for no reason, because it's all hormones, which means that none of your feelings are worth crying about. So when I felt the urge to cry during a sappy scene during a movie or while drudging through the stressful last weeks of college before giving birth, I tried to suppress it. I tried to deny I was feeling more than usual. I tried to not be the butt of anyone’s joke.

I thought I was a cliche, the butt of the joke I had been trying so hard to avoid.

Then after I had my baby, the crying was unavoidable. I knew my hormones were raging and that I couldn’t be trusted to be out in the world without bursting into tears. My husband and I went out for a quick lunch while my mom watched our newborn, and I was crying before our food was served. For no reason. Literally for no reason. I thought I was a cliche, the butt of the joke I had been trying so hard to avoid.

The truth, however, was that I did have a reason to cry. I was quickly developing postpartum depression. Sure, there were spikes of hormones that caused me to burst into tears over Super Bowl commercials, but I was also struggling from a steady chemical imbalance that led me to cry day after day. I didn’t tell anyone about it — partly due to the the shame I felt for not loving motherhood as much as I had expected, but also partly because I thought maybe my emotional swings were normal.

Because that's the joke, right? When we become mothers, we just become big, floppy sacks of uncontrollable emotion. Crying for no reason is the norm. It’s the hormones. It’s funny — but I guess it's only funny when it’s not happening to you.

Making jokes about pregnant women crying over nothing is rude at best and downright dangerous at worst. No one should feel ashamed of their emotional responses, especially during such a sensitive time.

I didn’t want to become anyone’s source of entertainment. I felt awful. I hated crying so much and never feeling better, and I was scared of my experience being dismissed as just hormones, so I kept my struggle a secret for over a year. Had I felt a little less ashamed of my crying, maybe things would have been different.

Making jokes about pregnant women crying over nothing is rude at best and downright dangerous at worst. No one should feel ashamed of their emotional responses, especially during such a sensitive time. Crying isn’t something to be mocked. It’s an experience that should be cathartic and embraced during pregnancy and motherhood. It shouldn’t be something we’re taught to hide. We should encourage new moms to cry when they need to, because it's a normal and beautiful part of having a baby. You’re creating a new life and becoming more emotionally attuned to the world. What’s funny about that?