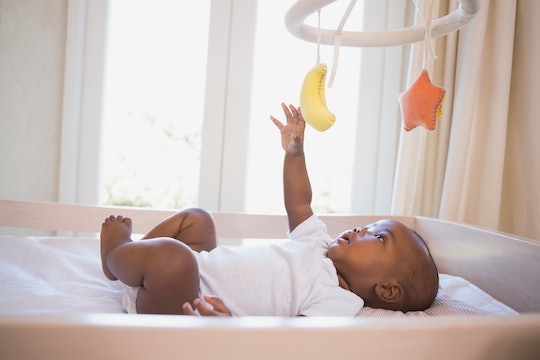 This Judge Reportedly Barred A Mom From Seeing Her Newborn For Over A Year, & It's So Disturbing

The act of taking a baby away from its mother is a horrible and tragic scene for anyone to try to picture in their minds — and truly, who would want to? In some circumstances, removing a child from a parent's care is warranted when that child is being harmed or abused, or a parent can no longer take care of her child. But for one African-American mother in Mississippi, her newborn infant was taken away from her when the baby was just 4 months old — and the reason is beyond infuriating. A Pearl, Mississippi judge barred a mom from seeing her newborn for over a year for unpaid court fees, according to The Washington Post.

The MacArthur Justice Center at the University of Mississippi School of Law took up the case of a woman identified only as "Mother A" due to youth court confidentiality laws. The mother, a resident of Jackson, was traveling through the city of Pearl, Mississippi, looking for a job when the car in which she was traveling was pulled over by local police for a "minor traffic violation," according to local news affiliate Mississippi News Now. From there, the situation deteriorated into a parent's worst nightmare as Mother A's 4-month-old infant was taken from her at the scene.

Once the police ran the driver's information, they discovered that both the driver and Mother A had outstanding warrants for unspecified misdemeanors. Both the driver and Mother A were arrested at the scene, when, according to online zine Boing Boing, the responding officer declared the 4-month-old infant "abandoned" — despite the fact that the baby's grandmother arrived within minutes of the traffic stop. From there, the custody case was turned over to Pearl Youth Court Judge John Shirley. Here's where this case appears to go completely off the rails from standard procedure into the cruel and unusual.

Shirley awarded custody of the baby to its grandmother, but enjoined an additional order barring Mother A from having any contact with her baby until she paid her court fees. It is not known how much the court fees totaled. Shirley has not responded to Romper's request for additional comment. The order was in place for an unbelievable 14 months — which means Mother A didn't even get to see her child for its first birthday. That's when she sought out the help of the MacArthur Justice Center.

Cliff Johnson, Director at the MacArthur Justice Center, said in a statement that Shirley's order is an example of "judges who are either openly hostile to poor people or completely insensitive to the unconstitutional disparity between... those who have money and those who don’t." Johnson continued, describing what happened to Mother A as "judicial kidnapping."

As a civil rights lawyer in Mississippi, I am no stranger to injustice, but for a judge to prohibit an impoverished mother from having any contact with her baby until monetary payments are made is shocking and repugnant. Such orders are tantamount to judicial kidnapping.

As a result, Judge Shirley resigned and the Pearl Youth Court has been permanently closed. Shirley issued a statement that read in part, "While I am prohibited from discussing a youth court matter, I have always sought to protect children from those who abuse and neglect children and I have at the same time protected the rights of the accused." Despite this, Shirley doesn't appear to think he's done anything wrong, and he compared what happened to him to what happened to Jesus Christ — no, seriously. You can read Judge Shirley's resignation statement in full.

According to the vera Institute of Justice, black women are disproportionately targeted by justice systems — and not just in Mississippi. A recent report from Vice's Broadly found that on any given day, as many as 700,000 people are in jail awaiting trial. Of those, 450,000 are in jail simply because they can't afford bail. While Mother A wasn't jailed for the 14 months she wasn't allowed to see her baby, her situation illustrates systematic and institutional punishment of the poor and people of color, especially black mothers.

Ultimately, it doesn't matter that a mother owed court fees, or how much they were. It's obvious that Mother A was basically punished for being poor in one of the cruelest, most extreme ways possible by having her child not only taken from her, but by being denied any contact with her baby — a punishment that no parent deserves.

More Like This
Jennifer Lawrence Just Kinda, Sorta Revealed The Sex Of Her First Baby
13 Celebrity Parents Who Also Raise Chickens At Home
Multiple Jif Peanut Butter Products Have Been Recalled After 14 People Got Sick
20 Amazing Shows With LGBTQ+ Characters To Watch With Your Kids