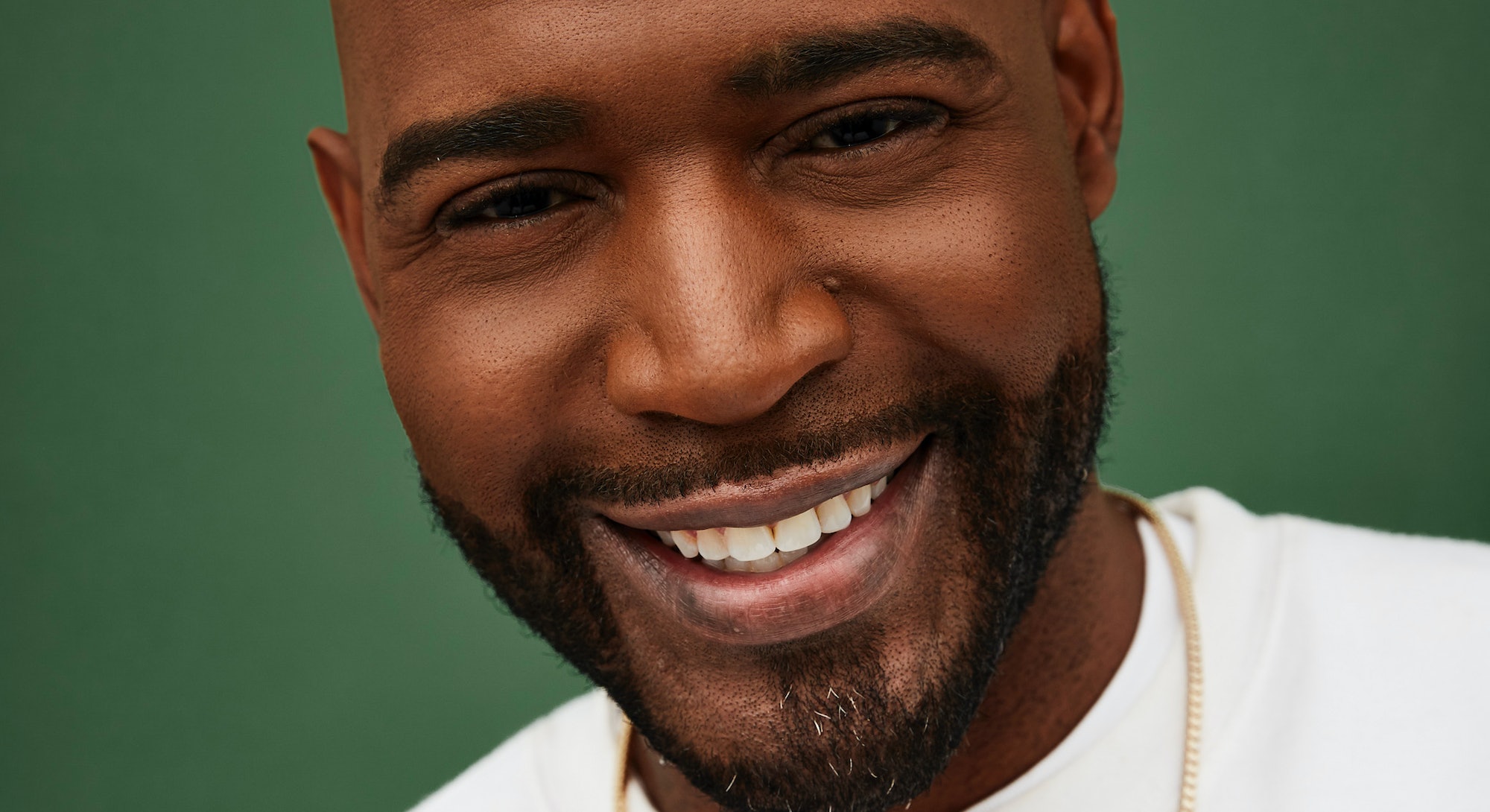 After mustaches and mullets have been lopped onto tile, after bites have been taken of a homemade risotto that will be “added to the repertoire,” it is Karamo Brown’s job as cultural expert on Netflix’s Queer Eye to guide each episode’s “hero” to an epiphany — usually involving tears. The “Fab Five” tenderly administer zhushes and collar-pops to the subject of the makeover the way a Hatchimal is opened with a thousand gentle pats, but the final shattering is almost always triggered by Brown.

At fan events, people will “come to Jonathan [van Ness] and they'll want to like be, ‘Yas queen!’” Brown tells Romper. But when those same people get to Karamo, “They’ll want therapy,” pipes up Ian Jordan, Brown’s knowing fiancé, who is also in the room.

Brown smiles. “I'm always like, ‘You just were over there saying yas queen, I want a yas queen!’” But that is the former social worker’s superpower: making over the inside of a person.

I 100% believe that it's never too late for a parent to learn how to parent better.

A contestant on MTV’s Real World: Philadelphia in 2004, Brown then trod the reality-TV circuit, getting paid $10,000 to appear at clubs. He began abusing cocaine, but found reason to get sober in his mid-20s after discovering, via an auto-generated bill for back child support, that he had a 10-year-old biological son, Jason. Brown, who was living in Los Angeles at the time, moved home to Texas, reconnected with Jason’s mom, Stephanie (a high-school friend he slept with only once), stopped using, and felt his identity as “Dad” emerge the moment he laid eyes on his son.

He ended up adopting Jason, and Jason’s younger half-brother, Christian, with Stephanie’s blessing. It was a catalyst for Brown becoming the emotional super-conductor his cast members refer to as “Kar-Oprah.” (He worked for the Oprah Winfrey Network before joining the Queer Eye reboot.) “The way that I felt when I was 26, when I got Jason, and the things that I feel now at 39 are not the same,” he explains.

“I 100% believe that it's never too late for a parent to learn how to parent better,” says Brown, who often works with heroes on Queer Eye who love their kids but are clueless when it comes to parenting them. “We forget that parents just were the 19-year-old, the 20-year-old, the 30-year-old, the 40-year-old, and we're still going through transitions where we're learning about ourselves as we grow mentally and emotionally,” he adds.

Much as Queer Eye works to peel up the proverbial linoleum and reveal to each hero the beautiful (original!) floorboards within, Brown’s new children’s book, co-authored with Jason and illustrated by Anoosha Syed, aims to furnish kids with a sense of peace about who they are and how their family was formed. I Am Perfectly Designed (Henry Holt) is written as a conversation between two characters that resemble Brown and Jason at the age they became a family: “When you first saw me, you said, ‘He is perfectly designed, from his head to his toes.’ And I meant every word. Still do.”

The book joins a slim but mighty library of children’s books providing a more inclusive look at families, and Brown intends it to set off conversation among parents and children. The illustrations are for the most part based on real-life photos of the duo at the time they met (“And now there is us! That’s right. Now there is us.”), the age that Jason “started to feel as if he wasn't enough.”

At the same time, Brown found himself a bit lost as the only dad at the PTA, confessing to the moms there that he had no idea what he was doing. “We don't give ourselves enough permission to say out loud, ‘I'm figuring it out as parents,’” he says.

As father and son move through the story in I Am Perfectly Designed, the conversation changes, with the child asking his dad about the future, when he’ll grow up and move away. The real-life Jason, 22, now lives on his own. But as he and his father stand back-to-back to pose for a photographer, the latter stretching on tiptoes to be as tall as his son, the sense is that Brown is still as deep in parenting as he was when Jason was 10.

As he explains in his memoir, Karamo: My Story of Embracing Purpose, Healing, and Hope, Brown approached parenting tweens and teens very differently from his own father. “During that age, when their body is changing, their face is changing, their personalities are changing, that's when you really have to dig deep in the most,” he says, “and really show them the most love and show them that it's OK to be vulnerable, it's OK to love yourself, it's OK to treat yourself with kindness.”

That work is exhausting, though, as any parent suffering burnout knows. “I do get emotionally fatigued all the time,” says Brown. “All the time.” In fact, when I show up to introduce myself, he is tucked into a low couch in the tiny green room at the rear of a studio, napping, while Jason sits on a tall stool, scrolling through his phone, dressed in a sky-blue suit.

When I got voted off Dancing with the Stars, everyone was shocked because [Spicer] was sobbing for about an hour, and I realized you don't sob for somebody who has not touched your heart.

Brown was recently voted off ABC’s Dancing with the Stars, where his friendship with fellow contestant Sean Spicer came under fire from people on the left like author Roxane Gay, who accused him of humanizing President Trump’s former press secretary. “Right now, I'm in the space where I just really want to help our country start talking again and not feel so divided,” Brown says of his approach to tackling what he calls the “hate speech” issued by the president on a daily basis. “I don't mind taking the pressure on my back to bring it back.”

Though he has broached the possibility he will run for office in the future, right now Brown is focused on winning people over one by one. His friendship with Spicer exemplifies his philosophy to engage, not cancel. Brown says he never brought up Trump directly in conversation, but did let Spicer know that things he had said in the past “hurt me and those people you like.” Along with letting Spicer into his family circle, Brown had introduced him to transgender friends who had been in the military. “And when I got voted off Dancing with the Stars, everyone was shocked because [Spicer] was sobbing for about an hour, and I realized you don't sob for somebody who has not touched your heart,” he says.

I can't open you up emotionally and then be like ‘bye.’

People tell Brown exactly how he’s changed them: A policeman and Trump supporter who pulled Brown over as part of a prank in the first season of Queer Eye called him on Election Day in 2018 to let him know that thinking about Brown’s family had changed the way he voted. The heroes he helps on Queer Eye stay in touch by phone (“I can't open you up emotionally and then be like ‘bye,’” he says). Brown’s DMs are likewise full of people pouring out their trauma — the work is never done. Perhaps it’s the same for Oprah.

If, in the Queer Eye Voltron, Bobby, Antoni, Jonathan, and Tan combine to tackle the home life, nourishment, self-esteem, and presentation of each week’s hero, Brown’s skill is roaring out of the cave to reconcile the hero’s inner and outer life. And nowhere is that tension more pronounced than in new motherhood, he says: “You're making a mother feel the pressure of, ‘Not only do I have to care for this person, this new being, but I also have to take care of my mental [health] and my emotions, while also snapping back in three weeks?’”

Brown wants to give people space to evolve. At the beginning of the interview he leans back, but by the end he is giving out hugs as this very reserved reporter stammers, “Thank you, you’re so nice!” That’s just the impact he has on people.

The Karamo effect is best encapsulated by a trip he took to Austin to visit his fiancé’s family (Jordan is white). There, the pair recall a young grandniece staring at Brown. “It was the first time she had ever seen, I believe, someone African American,” says Brown. “And she was enamored with me. She was looking at me for hours upon hours.”

It is possible to live in a diverse state and not encounter diversity, he explains. “If you only walk to school and then home and then maybe to your aunt or uncle's house who lives down the street, you're never really exposed.”

So he let her stare at him, this little girl. And eventually, drawn in, “She just opened her arms wide and wanted to get picked up.”