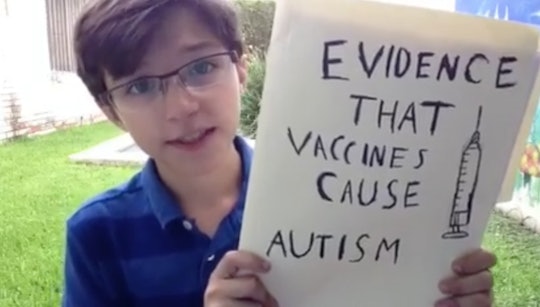 This Kid Compiled All The Evidence That Vaccines Cause Autism, & It's Brilliant

World, meet the next Bill Nye: his name is Marco Arturo, and he's here to school you on the connection between vaccines and autism. It's a contentious topic: The CDC and the World Health Organization both say the causal link is false — yet vaccine refusal has been linked to measles and whooping cough outbreaks in recent years. If you ask a stranger off the street, it's likely that they have strong feelings about vaccination — and Marco Arturo used that controversy in his favor. This kid's video on evidence that vaccines cause autism is 100 percent on-point... and also a little bit adorable.

Marco Arturo starts off by saying, "We've all been lied to by doctors and pharmaceutical companies about vaccines, and after a lot of research, I realized that vaccines do and will cause autism." Are you up in arms yet? He continues:

Actually, I gathered every single document I found and put it in this folder right here. Every single bit of evidence there is in the observable universe that vaccines do cause autism is inside of this folder, and I will go page by page, reading and explaining everything I've got in here because it's a lot of information.

He proceeds to open up the folder only to find — absolutely nothing. There's only sheet after sheet of blank paper.

The 12-year-old Mexican scientist looks skeptical for a moment, then says, exasperated, "I think it might be because there is absolutely no evidence to support the statement that vaccines are linked to autism in any way whatsoever." I mean, have you met a sassier kid? Specifically, a kid who gets sassy about science? Bill Nye, watch your back.

Not only does Arturo have personality, but he's got the facts down. "Smallpox was eradicated thanks to vaccines!" he says. "And you might think, 'It's my child, it's my choice.' Okay, I agree. It's your choice if you want to expose your child to deadly diseases, but you know, it's not just your child. It's basically everyone else's child. It's also everyone else's child you're putting in danger because you read some forwarded email."

Sassy, but he's right: vaccines are far more effective than leaving your child unvaccinated, but they're not perfect, either. The mumps vaccine is 88 percent effective, according to Wired, while the vaccines for measles are 97 percent effective. Take, for example, when parents don't vaccinate their children against measles, which is incredibly easy to spread: by infecting a now-larger, unvaccinated population, measles can more easily reach the vulnerable 3 percent of the vaccinated population whose vaccines weren't effective. According to Wired, once vaccination levels drop below 90 to 95 percent of the population, it can spur outbreaks, since not enough people are vaccinated to keep the disease from spreading.

"So, please," Arturo ends his video, before dropping a piece of paper with "mic" written on it. "Vaccinate your children." It's super shareworthy — not only to spread the word about vaccination, but to encourage kids to make a difference in STEM, just like Arturo has.