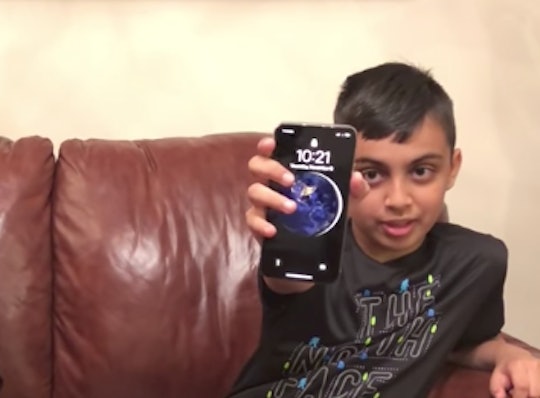 Parents had better watch out if they don't want their kids to see something they'd rather hide on their new iPhone Xs, or if they want to keep their toddler from accidentally buying pricey apps or game add-ons while they aren't looking. Because according to 10-year-old Ammar Malik and his mom, it's possible for children to get into their parents' iPhone Xs even if they're locked with Face ID. Sana Sherwani's kid was able to trick Apple's Face ID very quickly in a video her husband uploaded to YouTube, and it should act as a cautionary tale to parents everywhere.

More Like This
Survey: Just 30% Of Parents Would Get Their Kids Vaccinated Against COVID-19 Right Away
People Have Thoughts About A Mom Saying That Parents Are "The Real Teachers"
Peloton Recalls Treadmills After Child’s Death & Injuries
6 Books To Read If You're Thinking About Adopting

Right after Attaullah Malik and his wife set up Face ID on their new phones, their son walked into the room, and Sherwani joked with Ammar that, "There’s no way you’re getting access to this phone,” Attaullah told Wired. But when Ammar picked up his mom's phone, he very quickly proved his parents wrong. Because a "split second" after he looked at it, Ammar had an unlocked phone in his hands, much to his parent's shock.

In the below YouTube video, Ammar is clearly giddy over the accomplishment; right before he unlocks the iPhone X in the video, he declares, "I'm going to unlock this phone using this handsome face." (Plus, check out his epic "dab" at the end!)

Sure enough, all Ammar had to do was look at the device, and it was unlocked. Which could be very worrying to any parents who want to prevent their kids from accessing their phones — or apps, looking at you, toddlers! — for any reason.

So just how secure is the iPhone X if your child can get into it that easily? In a statement provided to Tech Crunch in October, Apple said:

Customer excitement for iPhone X and Face ID has been incredible, and we can’t wait for customers to get their hands on it starting Friday, November 3. Face ID is a powerful and secure authentication system that’s incredibly easy and intuitive to use. The quality and accuracy of Face ID haven’t changed. It continues to be 1 in a million probability of a random person unlocking your iPhone with Face ID.

Note the "random person" part of that statement. In a "Face ID Security" guide by Apple, under "Face ID and passcodes," it reads:

The probability of a false match is different for twins and siblings that look like you as well as among children under the age of 13, because their distinct facial features may not have fully developed. If you're concerned about this, we recommend using a passcode to authenticate.

So there is a chance that kids under 13 can get into your phone thanks to their "undeveloped" facial features, according to 9 to 5 Mac and Apple's own security guide to Face ID.

Apple did not immediately respond to Romper's request for additional comment on whether kids may be able to get into their parents' iPhone X smartphones despite Face ID.

Another part of Apple's statement that interests me is the bit where it says "siblings that look like you" might have a greater chance of tricking Face ID.

I have several siblings, and random strangers on the street know that we're siblings because we look so alike. I'm definitely super curious how easy it would be to hack the Face ID on an iPhone X if one of them had one.

Still, despite Face ID's flaws, it's still pretty secure. In Ammar's case, he was eventually able to unlock his father’s phone as well. But he could only do it once, according to Wired. And after Sherwani reregistered her face in different lighting, Ammar couldn't unlock it. She tried a third time in dimmer lighting, however, and her son was reportedly able to get into the phone yet again.

The moral of the story is: triple check to be sure your kid can't fool Face ID if you really don't want them to get into your iPhone X. And to get the most secure selfie, make sure you've got that picture perfect lighting first.