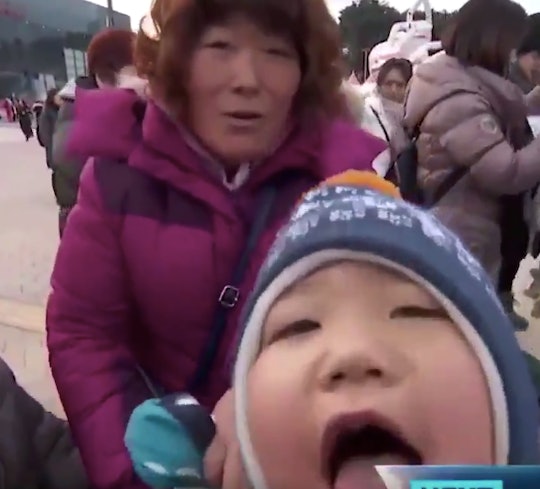 Friendship! Cooperation! Cultural appreciation! If you like all of those things, but think that sports are for the birds, don't worry; there's still something for you at the 2018 Olympics in PyeongChang, South Korea. a While some jerks were busy skiiing or whatever, a random kid trying to lick a camera in the Olympic Park became the true symbol of unity that we all need right now. It doesn't matter what language you speak or whether or not you can spell "triple Salchow," we can all agree on one universal truth: kids are super weird and hilarious.

The NBC camera operator who played straight man to this comedic genius couldn't have imagined that shooting some routine B roll of the crowd would lead to them catching the most important moment of the 2018 games. A young boy emerged from that crowd with an important message: "We are one. There is no language barrier, no cultural divide, no distance that we cannot overcome in order to embrace one another and say together in unity, 'We are all brothers! Your joy is my joy! Let us celebrate the beauty of mankind!'" I mean, I think that was his message. It's a rough translation. To the untrained ear, it might sound like what he actually said was, "Aghhhhhhhh! Ah la la la la la la la la laaaaaaagh!," as he tried to lick NBC's camera.

There's just something about a video camera that a child can't resist. Try taking your kid to the Target self-checkout or the more shoplifter-prone aisles of your local drug store if you don't believe me. They must be seen. They're drawn to it like a moth to a flame, or a mom to a Starbucks. And not knowing where that camera might be broadcasting, our champion had only limited means with which to communicate. He began with his arms and legs splayed, the international symbol for "Notice me! I am here! I am taking up as much space as I physically can!"

Then came the double peace signs. Some people might not know this, but while one peace sign means "Make love, not war," double peace signs mean, "I'm here to party!" This boy knew that, but he was clearly concerned that the rest of world might not get the message, so he broke out the big guns, the gesture we all kind of agreed to never do again after Miley Cyrus wore it out in 2013: the wacky tongue.

A woman (presumably his mom) rudely tried to silence the boy, but he would not budge. This was a matter of diplomacy. Then, to hear NBC's announcer tell it, the camera operator went for a high five, and was rejected. I respectfully disagree; he was clearly doing that velociraptor-taming pose that all the zookeepers were into a couple years ago. He's keeping the boy from attacking, is all.

That might have been a bad idea, because then the boy felt the need to prove that he wasn't a threat. He rushed the camera and intensified his tongue wagging in order to show the camera operator, and the world, that he meant no harm, he was only looking for a good time. This was the last straw for his adult companions, though, who finally pulled him away. For shame on them both. Our final glimpse of him is then obscured by two bespectacled tots who leaned in to stare at the camera's lens in wonder, almost as if they could see right through it and into our souls, here on the other side of the world. "We see you," their haunting eyes seem to say. "And we think you're weird, too."