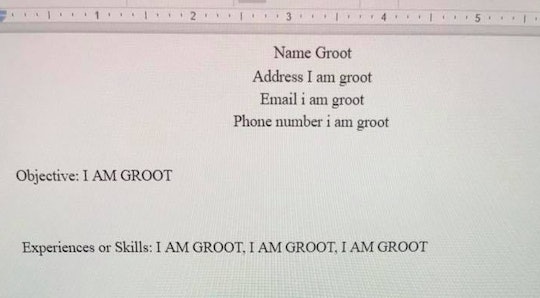 This Kid Wrote A Groot Resume For School, & It's Seriously Brilliant

As every teacher knows, there's usually a class clown in every classroom. And that was proven especially true recently in Jeffrey Scott Davis' class, when he told his students to choose any Marvel character and write a resume and cover letter from that character's point of view. One kid wrote a Groot resume for school, completely within the guidelines of the assignment for Davis' class, and it's a seriously brilliant choice on their part.

If you have somehow missed the wave of Marvel mania over the past 10 years, and particularly the box office powerhouse that is Avengers: Infinity War, Groot is a character from the Guardians of the Galaxy franchise, which is part of the Marvel Cinematic Universe. Groot is an "anthropomorphic tree-man," as The Verge described him, and he only speaks or responds with the words "I am Groot." It's understood that he's actually saying other things in his own language, but that's how it comes across to us regular ol' humans.

You can probably imagine the way one student in Davis' class took advantage of Groot's language abilities, or lack thereof, for this assignment. Think about it — if Groot was ever asked what his job is, he would reply, "I am Groot." If someone asked him what his address is, he would reply by saying "I am Groot." You get the picture. Well, that's pretty much exactly what Davis' student counted on for this assignment.

As shown in the Facebook and Twitter posts by Davis, which very quickly went viral, his student wrote "I am Groot" for basically every single important piece of information on "Groot's" resume — his name, his experience and skills, his personal interests, and so on. The matching cover letter also just read "I am Groot" over and over again, because honestly, that's absolutely how Groot expresses himself. It's MCU canon, friends. If there was ever a reason for Groot to have a resume or cover letter, this is probably precisely what it would look like.

From what Davis tells Romper in an email about the assignment, it sounds like he's got some really clever students on his hands. Cleverness is something most teachers like to see in their students — even if that cleverness is used to outsmart an assignment. Davis may have said it best when he wrote on Facebook about this student's response, "The idea that you miss 100% of the shots you don’t take lives within one particular student of mine."

Davis is a Career Technology Education, Robotics and Engineering Design teacher in Wichita Falls Independent School District, located in North Texas. He tells Romper in an email that his students had to pick an MCU character for the assignment, but that most ended up choosing characters "that were more like Tony Stark [sic] someone more business inclined."

And when it came to this Groot resume and cover letter, Davis was nothing but impressed by the effort. He tells Romper via email:

This resume was a great one primarily because the student saw the opportunity, kept it to themselves and never mentioned a word until I asked them about it.

But he did also add:

The student received a 95 and 100 on two separate grades. he had points taken off for capitalization and inconsistency on his name "Groot", he left out "I am". Grammar is very important.

Which seems totally fair to me.

Davis says other students picked Groot as well, "but only one turned their resume and cover letter in with this as their 'work'." He also says that he came across another very clever response to the assignment that he did not post. Davis tells Romper:

I did receive another very funny resume and cover letter done for Daredevil (blind lawyer by day, crime fighter by night) the resume was turned in written in normal Times New Roman print but there was another attachment that the student changed to represent the brail dots.

So Davis definitely has a classroom full of interesting, creative kids on his hands.

Davis is pretty shocked and excited by how the student's response spread, and he tells Romper that he "never imagined that in a million years that it would be as popular as it has become." In an attempt to protect the privacy of his student, Davis couldn't name the brilliant scholar in question, but his admiration for his student's efforts was clear.

I mean, the truly brilliant work this mysterious Groot impersonator turned in isn't really wrong, is it? The student followed the assignment guidelines, and clearly got very in character for what they turned in. It's not their fault Groot is a tree-man of few words.