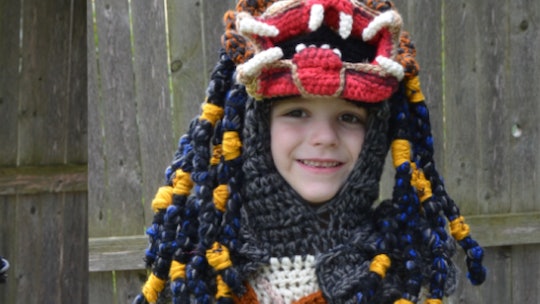 If you've ever been to a Party City-esque store in the month of October, you know that not only do those stores get crowded AF, but also that the costumes can also get super pricey. For that reason, many people opt to DIY their costumes, often at the last minute (hi!). But when your child is hoping to dress up as an other-worldly creature, DIY usually isn't an option — unless you're as crafty as this mom, who hand-crocheted her son's amazing Predator Halloween costume.

Ohio resident Stephanie Pokorny, who runs the website Crochetverse, makes incredible hand-crocheted costumes for her four sons every Halloween. This year, she shared a photo of her son Jake dressed as Predator from the science-fiction movie, Predator, Babble reported. From a distance, no one would have a clue this costume is entirely made of yarn, but up close, the design's intricacies are unbelievable. Romper spoke with Pokorny on Thursday to learn more about the family tradition, and her crocheting technique.

"I have four sons and our family adores Halloween, so I have always tried to hand make their costumes in some form," Pokorny tells Romper via email. "It starts with my kids telling me what they would like to be that year and then I tend to watch the movie so I can get a good idea of the character before I start. I worked on [the Predator costume] over the course of three weeks and I am estimating about 40 hours of work time to bring him to life."

Take a look at how detailed and realistic the costume is:

40 hours times four kids equals a whopping 160 hours crocheting Halloween costumes every fall. That's quite a chunk of time — but Pokorny doesn't mind at all. In addition to her creations undoubtedly impressing all their fellow trick-or-treaters, the yarn also helps keep her kids warm. "Over the last four or so years, I have really loved creating them in crochet as we live in Ohio and often times it snows, so it is an amazing way to get exactly what we want and keep the babes warm and toasty!" she writes to Romper.

Unsurprisingly, Pokorny's sons all love wearing their mom's creations. That's not only because they look so awesome, but also because making costumes has been a family tradition ever since Pokorny was a child herself. She adds:

My boys love watching as it comes to life... Jake would come home from school each day and say, "Is it done yet?" He gets really excited when it is being created and when it is done, like screeching excited. My mom used to make my costumes and I can remember loving it and being so excited, so it brings great joy to be able to do that for my children too!

Based on photos Pokorny has shared on her website, her kids are clearly fans of the supernatural — which makes the task of creating a costume all the more challenging (in a good way). She has also turned her sons into creatures including Pennywise the Dancing Clown, a Smurf, Harry Potter (including a crocheted magic wand), a pizza with Mickey Mouse ears (random, but so cute), and a garden gnome.

For those who are handy with a crochet hook and hoping to follow Pokorny's Predator costume pattern, I have some bad news. Pokorny made the Predator costume entirely free handed — which is how she makes all of her kids' costumes. But luckily, patterns for many of her other designs are available on the website Ravelry.

And don't let the lengthy process put you off from crocheting a costume this year. For one thing, Pokorny told the Irish Independent: “Crocheting is a wonderful stress reliever and outlet for creativity." Additionally, your kids will probably get many more wears out of their costumes, even after Halloween is over. "After Halloween, we do not even put them away! We have a huge costume bin and they are always dressing up," Pokorny tells Romper. "So, I love that they play with them year round and use their imaginations with them. Nothing like turning the corner and seeing Predator in the hallway!"

So if your kid has been begging you for a unique Halloween costume this year, you'd better start crocheting immediately.