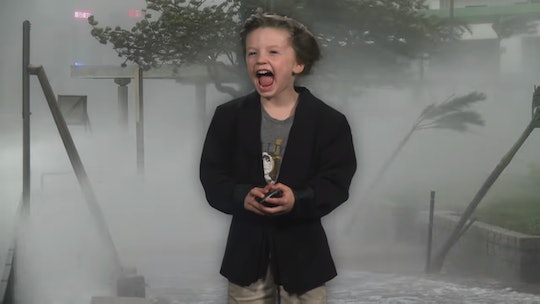 Your phone might be blowing up with push notifications about nor'easters, trade wars, and March Madness, but trust me, this this kid's viral TV weather report is the best piece of news you'll see all day, even if you don't care about the forecast in Nashville, Tennessee. Kindergarten students at Waverly Belmont Elementary received the assignment to film their own segments with the help of their parents, but the teacher probably didn't count on Carden Corts, age 6, having a bit of an unfair advantage.

His dad, Charlie, works at Rated Red, a digital video network studio, which gave him access to all sorts of professional equipment, including a green screen, the Tennessean reported. Some of the effects are a little more DIY than you'd guess, though. "We had a leaf blower that happened to be in our shed at the office and we thought it would fun to use," Charlie told the local paper. Way to make all the other parents feel like slackers! Carden's report is thoroughly entertaining in the way only a 6-year-old can be, and the pair said they shot the entire video in less than 10 minutes. This kid's a natural on camera, and now that he's gone viral, he might be giving grownup meteorologists some real competition.

The bit starts off with some splashy graphics, but pretty ordinary dialogue. After introducing himself, Carden timidly offered, "I'm not a actual weatherman, but I do know my sight words. Today's weather is brought to you by the letter C." But then his personality begins to shine as he adds, "And also, Pokémon cards!" He then showcases his "weather simulator" for the audience, pressing a button to transport himself into a hurricane, a blizzard, and a tornado, really hamming it up for the camera. He does take a moment to report the actual Nashville weather (cloudy with a high of 51 degrees) before the bit devolves into a Venga Boys-fueled dance party, as all weather reports should.

In less than two days, the video shot to the number 6 trending spot on YouTube, with more than 1.2 million views and counting. "The hurricane part made me spit my drink out because it was so unexpected," one viewer commented. "Love this!﻿" Another rated it: "10/10. Would actually watch weather reports if Carden was hosting.﻿" The official account for WeatherNation, a streaming weather app, even invited Carden to stop by the studio in Denver if he was ever in town. Real meteorologists are sharing the video with their Twitter followers, as well.

But Carden's getting the most fan love over on the front page of Reddit. His uncle posted the video to the site on Thursday, and in one day, it's already received more than 122,000 points (which denote comments and up-votes). "This has more production value than the average local weather report," wrote one user. Another declared Carden "the best weatherman to ever exist," and another said it was the "Most watchable weather report I have seen," adding, "my roommate was dying after 'SPRING BREEEEAAAAAAAAKKK!!!!' Even the dog liked it."

Some comments expressed sympathy for the parents of all the other kids in Carden's class, whose children are no doubt wishing they had access to a TV studio, as well. But mostly, they just love this kid. "He's actually funny," marveled one user. "At first he seemed shy, but he's just got it. Doesn't even look like he's trying." Two more debated whether Carden would end up prom king by the end of the year, or replacing the principal. And best of all, someone even offered to send Carden their most cherished Pokémon card. "I was saving it for my future son but he has earned it," they wrote. He certainly has.