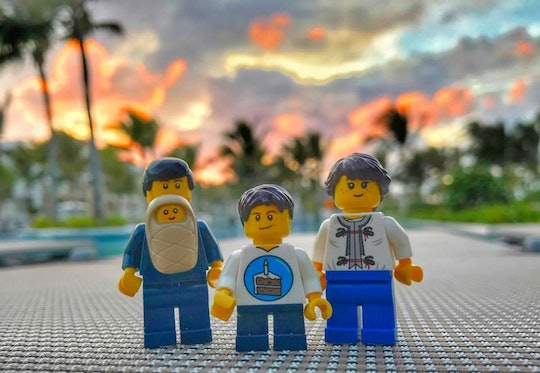 The trials and tribulations of parenting are things that only other parents can seemingly understand. As much as your non-parent friends might try to empathize with the busy schedules or breakdowns, it just takes another parent to truly get it. Which is why this Lego Dad Instagram account is so on point.

The dad behind the genius account, who has chosen to stay anonymous, posts about the ups and downs of being a parent using Lego figures, proving once and for all that as trying as parenting can get, there's always room for a little humor. The account is updated regularly, documenting the triumphs and fails of Lego Dad, Lego Mom, and two Lego babies. They are the very definition of "meme-worthy." Lego Dad told HuffPost he noticed that there were many "minifigures," or little Lego people, as most people call them, out there. But there was a gap that needed to be filled.

"There’s a lot of different minifigure pages, but as far as I could tell there weren’t many parents, which is weird because there’s about 5 billion Lego people worldwide," he said.

Whether or not you're a "Lego person," the scenes he creates are hilarious — especially if you've ever asked a kid to help you unload the car after a day at the beach. Check out some of the best snapshots below.

Just A Day In The Life Of Every Parent Ever

The anonymous Lego Dad has a Facebook and Instagram account that any parent in need of a laugh should probably start following as soon as they drop the kids off at summer day camp. Which, actually, is the whole point of the account, anyway.

As Lego Dad told HuffPost, “It’s OK to laugh sometimes, even at yourself." He added that he does have an advantage when it comes to dealing with toddler tantrums. “Kids will be kids regardless. The only advantage that I have as a parent is that I can take mine apart," he said. Obviously, he means his Lego kids. Or at least one would hope so.

For other "Lego people" who are interested, the brand released a set of family Legos last year. The Lego City set has a working mother, complete with business casual attire, and a "hipster" stay-at-home dad, who just so happens to have a beard. The line also includes a man in a wheelchair and a grandparent (complete with an ugly sweater) babysitting his grandkids in the park.

For a good laugh and a little lego-inspiration, give Lego Dad a follow and pour out your existing collection to get started on your own hilarious scenes. Just be careful not to step on one on the way to the fridge.