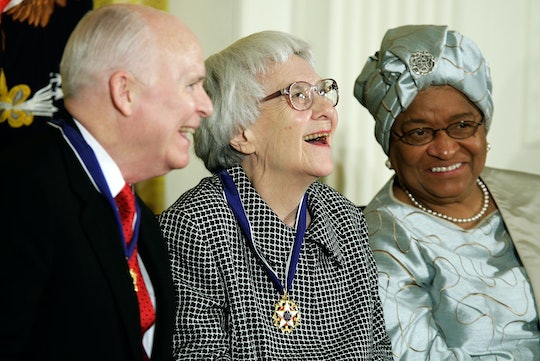 Harper Lee was famously reclusive, but even America's most beloved author of one of America's most beloved books of all time, To Kill a Mockingbird couldn't resist Oprah Winfrey's star power. So, in 2006, Harper Lee wrote a letter to Oprah about the magic books hold for kids and her own childhood love of reading. It's easy to imagine Lee falling in love with Oprah and her book club, which sparked America to re-discover books in a big way and launched a million wine-soaked book clubs.

The letter is all sweet Southern charm and paints the quaint picture of Lee and her childhood friends coveting, sharing, and collecting books. There was no library, movies or TV and adults didn't spend their time worrying about kids' entertainment. And, so, books were her rural Alabama town of Monroeville's most intoxicating vice. Lee wrote in her letter to Oprah, which was published in O Magazine:

As we grew older, we began to realize what our books were worth: Anne of Green Gables was worth two Bobbsey Twins; two Rover Boys were an even swap for two Tom Swifts. Aesthetic frissons ran a poor second to the thrills of acquisition. The goal, a full set of a series, was attained only once by an individual of exceptional greed — he swapped his sister's doll buggy.

Lee's sweet description of how important books were to her childhood are a good reminder that, with so many other distractions for our kids' attention in an increasingly screen-focused world, it's easy to forget the pure joy and entertainment that can come from a classic book. She also talks with sadness about the black children in her community who were denied even the limited access she and her peers had to books, and how isolating that must have been for them.

But then, in the same letter, she contradicts herself and dismisses the value of technology offering our kids easy access to almost any book in the world. I get her intent — to re-visit the romance of the printed-and-bound page. And that's real. But, while she's explaining how "scarce" books were in her childhood, she totally knocks technology and misses the major benefit this generation's kids have when they grow up in the age of immediate information. She wrote:

Now, 75 years later in an abundant society where people have laptops, cell phones, iPods, and minds like empty rooms, I still plod along with books. Instant information is not for me. I prefer to search library stacks because when I work to learn something, I remember it.

But laptops, cell phones, and iPods deliver printed words and books to everyone, instantly, removing the class and financial barriers like the ones that kept books out of the hands of kids dying to read them in the '40s, '50s and '60s — particularly black kids in the rural South before the Civil Rights Movement.

Lee, as the icon of the modern American novel, can be forgiven for her nostalgia, and she's certainly not alone. Yes, reading to our kids and exposing them to books is critical. There's no disputing that. But this generation's kids reading To Kill a Mockingbird on an iPad isn't going to rob them of the same trans-formative experience they could have if they read it on real paper like the generations of kids before them. Reading is a wonderful thing. And making reading easier, cheaper, and more accessible is an even more beautiful thing. The delivery method is beside the point.

I bet Oprah agrees too but was too flattered by the letter to care. And who could blame her? Now if you'll excuse me I'm going to download To Kill a Mockingbird on my iPad.