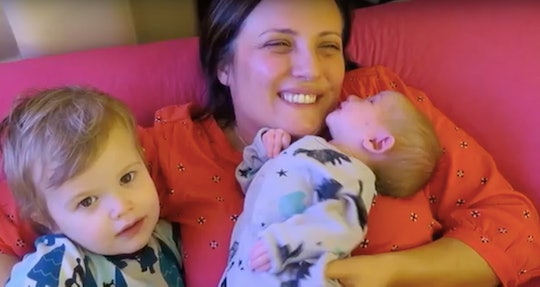 Couples who use fertility treatments like in vitro or intrauterine fertilization to get pregnant are unfortunately used to answering invasive and rude questions. But sometimes its goes further than they'd ever expect: Allison Blixt's is suing the U.S. government after her child was denied citizenship to because the "wrong" partner carried her. Unfortunately, despite the fact that one million babies have been born in the U.S. via fertility treatments, according to a report from NBC News last year, our culture is still obsessed with "where the baby came from" to the point that it impacts their citizenship, legal guardianship, and even health care.

This particular story encapsulates all of those issues. Blixt, an American citizen, went to the U.S. State Department to apply for her children's American citizenship with her Italian wife, Stefania Zaccari, according to a report from BuzzFeed News.

They have two children via donor sperm but both are listed on the birth certificate as parents. One kid, Massi, was born in 2017 using a sperm donor and carried to term by Blixt, the American citizen. Their toddler, Lucas, was conceived using another sperm donor, who was not a U.S. citizen, and carried by Zaccari.

Although they currently reside in the U.K., they wanted to apply for American citizenship, given that Blixt is from the U.S. They were shocked when a State Department official started asking them whose eggs were used to conceive, where the sperm donor was from, and who carried the child. According to U.S. citizenship requirements, because Lucas was carried by Zaccari and not an American citizen, he can be denied citizenship.

They met in Israel and want to move to California, where Adam's family is from. Instead, they've been forced to live in Canada, away from both their families. It's an awful situation all around. Aaron C. Morris, executive director of Immigration Equality, the organization representing the two couples told the Advocate in a statement, “The government is treating same-sex couples as if they were not married.”

According to the Foreign Affairs Manual, citizenship can be transferred from a parent to a child born abroad as long as they have a biological or blood relationship. However, a child adopted from abroad can become a naturalized citizen.

And, according to the Immigration and Nationality Act, kids can inherit their parents citizenship as long as the parent has lived in the U.S. for five years and meets other requirements. Blixt and Dvash-Banks' lawuits claim that the State Department is considering their children born out of wedlock, thus not meeting the requirements, even though both couples are legally married and were when their kids were born.

Blixt told the Washington Post that she could have "sponsored" her child as a step-parent and then brought her son in as an immigrant, but she declined on principle and that it was "too hard to swallow." She added, "I'm his mother."

Dvash-Banks had a tourist visa for his son and is applying for a green card, but these measures aren't the same as birthright citizenship. The family and the child risk being questioned when they travel, for example, or being excluded for certain benefits. And the child wouldn't be able to vote or run for president one day.

Given that both parents are listed on the birth certificate and married, it's safe to assume that a State Department official never would have even considered asking them "where the eggs came from" or about a fertility procedure had they been a heterosexual couple. A heterosexual couple could have slipped through that line of questioning altogether, even if the baby was conceived with a sperm donor and carried by someone without American citizenship. It never would have come up.

Despite being legally married, same-sex couples who use fertility treatments to have their children face discrimination all the time when it comes to guardianship. Some states, for example, won't recognize a non-biological parent as a legal guardian, according to the National Center for Lesbian Rights.

Blixt and Dvash-Banks' lawsuits are further proof that LGBTQ parents' rights are always precarious — and that our focus on defining families by how they look or how they came to be together hurts people. For a country that prides itself on caring for the well-being of children, these lawsuits show that we have a lot of work to do.