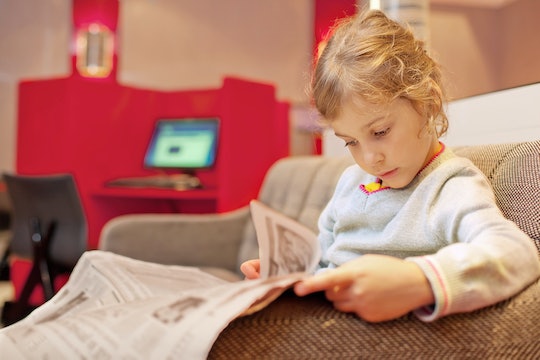 Ever since details first began to emerge of the role fake news played in the U.S. presidential election last year (with bots shamelessly sharing false stories about candidates on both sides and real humans swallowing those same stories), people have been asking how we can stop the spread of fake news in society. Many of those answers have focused on the tech community's responsibility towards consumers and instating new regulations — but for parents, taking one librarian's advice on teaching kids to spot fake news seems like the best way to help raise a generation that's immune to the wily ways of spambots.

On Wednesday, in an op-ed for The Washington Post, librarian, teacher, and mother Maureen Paschal doled out advice for parents on raising kids who are savvy enough to know the difference between true and false headlines. Because, as she pointed out in her op-ed, "the only reliable way to protect citizens from fake news, alternate facts, or hate groups is for all of us to learn how to navigate digital information with discernment and skepticism." And to do that, we need an entire society that's equipped with the tools to do so.

So how can parents do that at home, especially for their youngest kids? Here were some of Paschal's top tips that she shared in her insightful op-ed for The Washington Post:

Teach Kids To Understand The News

As a child, did anyone ever sit down and teach you the different sections of a newspaper and the role each one played? Did you learn the difference between an op-ed in a newspaper, a commentator on television, and an actual reported piece of journalism?

You can cultivate kids' media literacy by reading and watching current news, then discussing differing views and descriptions with them. There are age-specific courses out there to help kids digest and dissect media, and early childhood consultant Faith Rogow told Slate in November that parents can cultivate media literacy in younger children by simply asking them a few questions about the media they consume.

Rogow told Slate that parents should ask kids what they think will happen next and why. "For the youngest children, the answers are less important than simply establishing the expectations that their answers will be based on evidence," she said. "When children know they are going to be asked for explanations, they attend to media differently."

Help Them Understand Points Of View

This can seem more complex, but it's something you can practice simply by reading stories and discussing them afterwards — or talking about events that have transpired in a day. There's a book that tells the story of the three little pigs from the wolf's perspective (it's actually a really great read for youngins), and Paschal suggested in her op-ed for The Washington Post that having kids compare and contrast the pigs' view from the wolf's view of the whole incident.

It's an attitude that parents can also cultivate in kids by talking to them about everyday incidents. When they have an issue with a classmate, ask them how the other student maybe saw the incident. They'll learn to value hearing input from all sides and understanding things from a balanced perspective.

One point Paschal really brought home in her op-ed for The Washington Post was to teach kids to place importance on getting accurate information by accurately modeling that attitude. "I don't think relying on news aggregator websites such as Drudge Report or Google news is being in charge of the news you consume," she wrote for The Washington Post. She continued:

Even news-focused websites like the Skimm can set a bad example for our kids. Their premise is that we are too busy to read the news so we should let them read it for us — then they will tell us what to think about it. It's too passive, and it leads to lazy habits — the kind of lazy habits that result in a fake news story going viral on Facebook. We should model a much more proactive example with our own news consumption.

If you start early enough, you won't need to worry whether social media platforms manage to get fake news robots in line or not — since your kid will be a pro at sorting through the real and the false to get to the true story.