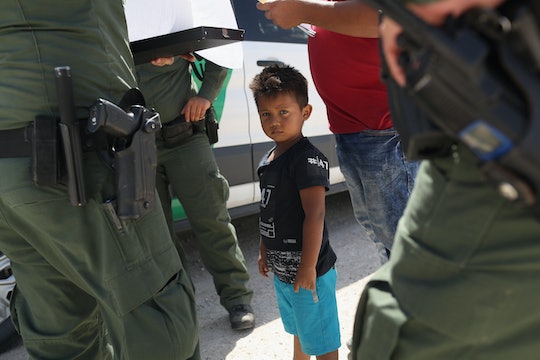 The List Of "Families Belong Together" Protests Continues To Grow

Throughout the week, Americans took to rallies and social media to protest the Trump administration's new immigration policy of separating families at the United States-Mexico border. And while some people think the family separations will end due to President Donald Trump's executive order on Wednesday, it's clear the fight is far from over. Immigration policy experts argue the executive order won't reunite families who have already been separated, and it's likely undocumented immigrants will be held indefinitely at family detention centers, according to NBC News. In response to the ongoing crisis, "Families Belong Together" marches will take place across the U.S. on June 30 as planned. People who plan to attend the marches will be pleased to learn the list of "Families Belong Together" protests continues to grow — a sign that Americans want to end this humanitarian crisis.

On Monday night, advocacy groups (MoveOn, the American Civil Liberties, and the National Domestic Workers Alliance) came together to organize nationwide Families Belong Together protests. The protests were created in a response to the upsetting rash of family separations at the United States-Mexico border, a result of Attorney General Jeff Sessions' zero-tolerance immigration policy, according to Vox. The zero-tolerance policy intends to criminally prosecute anyone attempting to illegally cross the border, including families seeking asylum. It's important to note, however, that seeking asylum is not a criminal act, and the ACLU argues the separation of immigrant families is unconstitutional.

Following immense public pressure, Trump signed an executive order on Wednesday stopping family separations at the border. Due to the order, some people wondered if the Families Belong Together protests would go on as scheduled. Well, it looks like the the answer is a resounding yes.

The executive order that Donald Trump signed today is not a solution to the crisis created by his administration; it keeps kids imprisoned indefinitely, and doesn't reunite thousands of separated families. But it does show the administration is reacting to public pressure, so we will continue to increase our pressure for justice at hundreds of events on Saturday, June 30, to say that families belong together—and free.

What's especially inspiring about the nationwide protest is that the list of marches continues to grow. As of Thursday, the list of protests includes the following states and cities, according to MoveOn:

It's also important to note that Washington, D.C., is the main site of the protests. If you're interested in going to the D.C. event, it will take place in Lafayette Square, across from the White House, according to HuffPost. As of Thursday, 13,000 people have signed up to attend the event, according to Facebook.

Additionally, it's interesting to see the long list of participating cities in Texas. I imagine those rallies will be especially powerful, as that's where many families are being held in immigration detention centers. I'm also curious to see which protest Texas House Rep. Beto O'Rourke will attend, because he's very passionate about this issue. Beto tweeted on Wednesday, according to Twitter:

On that note, if you're interested in attending a protest, visit MoveOn's website for an updated list of locations. It's clear the list of rallies on June 30 is continuing to grow, and that gives people a lot of hope.