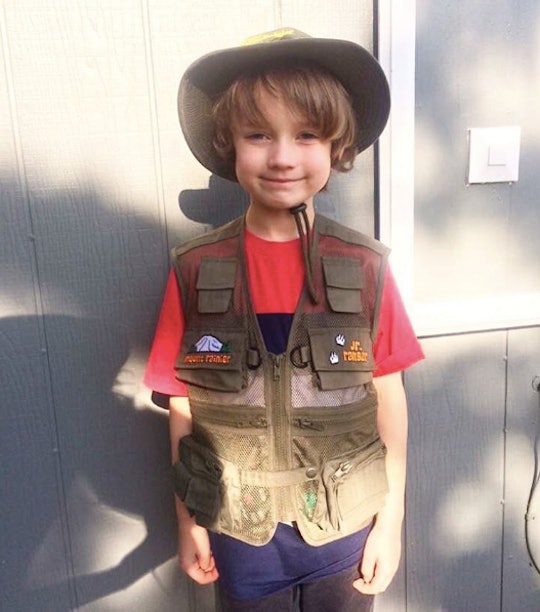 If you are prepared to have your heart just burst with love today, this little boy crying about people "wrecking" the planet will most definitely do it. It's somehow hysterically funny, inspiring, and, well, it's just perfect. Six year old Henry Hall has long (well, as long as a 6 year old can be involved in a movement) been a supporter of the environment. For Halloween this year, he channeled his inner Leslie Knope and dressed as a park ranger. But it's not just fun and games for Henry. After seeing a video in school about the effects of people on the environment, Henry was ready to take a stand.

But he needed to have a good cry about it first.

In the video, just sobbing, straight up sobbing, like he's lost his first love, Henry says that he wants to take it upon himself to stop "dumb" people who throw trash on the ground or hurt animals. "Or I could call them the 's' word," he cries. That word would be "stupid," of course. He has a point, littering is stupid.

Henry tells his mom, Allie Hall, who posted the now viral video to her Facebook page, that he wants to be "an adult right now" so he can "do his job right away" of letting people know just how bad they're being to the planet.

Oh, kid, let's hope you feel that way in 20 years because you are going to be everything the Parks Department ever dreamed of.

I think my favorite part is that he has a plan of action. Hall's mom, bless her heart, reminds him that he doesn't have to wait so long to do "his job." She suggests there are things he can do right now. He takes a minute to consider this — between sobbing about the "baby animals" — and decides his mom could drive him to Little Mountain (which must be their nature spot of choice) and he could bring a whistle (oh my goodness, I'm crying) to stop all the bad people.

That's aggressive. When he says he wants to fight people over their bad habits, his mom suggests that the pen may be mightier than the sword and that he could put up some posters to remind people to clean up after themselves.

Sniffling, he nods. "I'll do that and fight." He is not giving up. He just doesn't want animals to die. Henry is a simple man. He might also need a nap and an after school snack (in sustainable packaging, hopefully).

Henry's already taken on park ranger status at home, getting right down to work, grown up or not. He's plugged the sink up with a toy metal pan and wrote (in Sharpie, of course) "don't even use sink anemore [sic]." He drew a little fish for effect. The shower, too, has been blocked. This time he goes for the guilt trip. "Don't even take a bath. Don't you like animals? P.S. your braking [sic] my heart."

Henry means business. He "hates" the bad people who are "just being rude" to the planet. Don't make him blow his whistle at you or call you "the worst." Pick up your trash. Don't break Henry's heart.