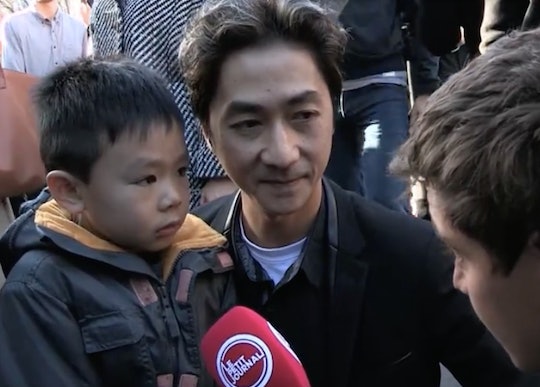 I have to admit that I haven’t talked to my child about the Paris attacks, and I probably won’t. She's 4 years old, and I have no idea how to approach the explanation of such atrocities to young minds. Unfortunately, not every parent has the luxury of avoiding this talk. Kids in Paris are obviously going to find out about the events that went down November 13, and parents will need to address the confused questions that inevitably come up.

The little boy in this video, posted on Facebook by French news show Le Petit Journal, assumes that he and his family will need to move away from Paris now that the attacks have taken place, since the bad people that did this have guns and might shoot them at him and his family. His dad has to break the news to his unsuspecting son that there are, in fact, bad guys everywhere in the world. God, that must suck, having to tell your kid this horrible, awful fact. Then this incredible man takes the conversation where I never would have thought to take it, explaining that the flowers will protect us from the mean men and their guns. After all, that’s why everyone is placing them at the scene of the shootings.

Flowers to protect us. Wouldn’t that be lovely? And isn’t that the perfect metaphor for what they represent? They represent the love we are fighting the good fight with. And when you look out over the hundreds and thousands of flowers that have been placed across the city, you can see that the people fighting with love will always outnumber those bad men with guns. They are louder, sure, and they can try to scare us with their threats, but when you fight with love, you will win.

...And the boy gives us a basic answer, through the lens of a young child.

The poor kid thinks they'll have to move, and his dad breaks the not so good news to him: there's no point in moving.

But he's still scared, obviously. Who can blame him? Bad guys have guns, and guns kill people. Then, this dad nails it in the parenting department.

What? Yes! Wait, what the hell does he mean? I am on the same wavelength as this kid at this point in the video. Then his dad explains everything. And I want to cry.

And just like that, this little boy's fears are assuaged, and I have to say that my fears are, as well. Thank you, sir.

Flowers for protection, candles for remembrance. Sounds like a good message to send our children to me.