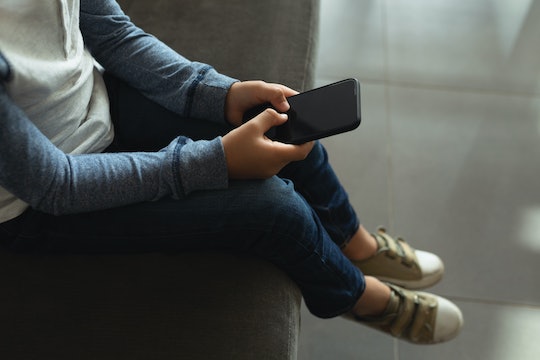 It has become so second nature that most moms don't think twice about handing over their smartphone to a kid who needs some instant entertainment. But this parenting hack can be a tad risky, as this little girl who had Siri change her mom's name to "Poop Your Pants" recently demonstrated. Spoiler alert: Things didn't end well for the mom in question.

Lauren Brown, a senior district manager at ADP in Maitland, Florida, took to LinkedIn on July 30 to share a hilarious story about her daughter and Siri, a cautionary anecdote that quickly went viral.

“In case you’re wondering how my career is progressing, my daughter asked #Siri to call me ‘Poop Your Pants’ which I didn’t realize until I was copied on an email to a client,” Brown said, along with a image of her accidental email faux pas, featuring her new title, Lauren "Poop Your Pants" Brown.

"Let this be a cautionary tale to all you working parents!" she continued.

Although I can't even begin to imagine the horror of Brown's predicament, I'm chuckling too. You have to wonder what Brown's colleagues must have been thinking as they drafted their emails to Poop Your Pants, right? I'd love to hear from them.

Of course, other fellow parents found Brown's situation hilarious, with one LinkedIn user sharing their own cringe-worthy story.

"My daughter did this to my dad. He’s 72 and drives for Uber and barely knows how to use his iPhone," they shared. "A passenger had a question and my dad felt proud saying, 'Oh I’ll ask Siri.' When he did, she said 'Here is what I found online for you, Lady Lumps.'" Ha!

They continued, "He was so embarrassed. And it wasn’t until after he called me did he learn what lady lumps actually are! Lol. Needless to say, the passenger cracked up laughing."

Another shared her own son's name change hijinks, writing: "Oh my goodness my son did this to me!!! He told Siri to call me 'jiggly butt' ... I didn’t know whether to be mad or proud that he got me ... hahaha!"

And then we have this:

"My wife’s phone calls her stinky foot McGillicuty… And I haven’t yet told her how to undo it. Indeed it has some very awesome side effects, like her car refers to her as stinky foot McGillicuddy, as does Alexa and the TV… and of course as a result of that so do our three girls."

After going viral seemingly overnight, Brown posted this follow-up on her LinkedIn page:

"I used to #dream of being #featured on the pages of PEOPLE Magazine | PEOPLE.com for dating a #handsome, #foreign dignitary, but then I grew into a #strong, #independent #woman and I got there on my own! Move over, Meghan Markle. Poop Your Pants has arrived! Thank you for all the shares! #Laughter is my favorite thing and I’m happy to have spread some #smiles!"

It's worth pointing out this isn't the first time a kid has had a field day with their parent's phone. In June, for instance, a toddler accidentally purchased a $430 couch from Amazon. When it arrived, her mother had no idea where it came from. Might be time to disconnect the "buy with one click," setting on your Amazon account, folks.

Luckily, all of these oopsies are more funny than dangerous, and is par for the course in a digital world. Plus, couldn't the world use a few more laughs right about now? Brown's story is the perfect reprieve from the heavy hitting news that floods our inboxes on the daily. But that being said, check your iPhones once in a while because you never know when your kid is going to feel the need to rename you.