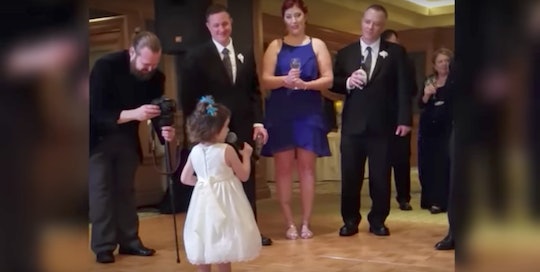 We are officially in the midst of wedding season. Yes, summer is here and with it, a plethora of wedding invitations, flowers, open bars, and drunk uncles everywhere making awkward speeches. Of course, weddings are a joyous occasion, but they can also be highly stressful and tense for those involved. Especially when it comes to the toasts — specifically when you're the one responsible for giving the toast. There is a very thin line between what is good and what is bad, and thank goodness, one person is here to help you learn the difference before you mess up. In fact, this little girl's wedding toast is so much better than yours probably would have been, it's probably best if you just sit back and take a few notes.

There's a lot of pressure to deliver an awesome wedding toast these days, what with all those bridesmaid and groomsmen choreographing complicated routines for guests, and flash mobs going viral all the time, now. But this video, recently made famous by America's Funniest Home Videos, has set the bar even higher. In it, a little girl, who looks to be about 3 or 4 years old, holds her ground while delivering a long, drawn-out toast to the happy couple, despite all the laughter in the background.

At first, she starts discussing how things used to be, beginning her speech with, "When I was a baby..." and it only gets better from there. Don't believe me? Watch for yourself:

She then proceeds to discuss how small she was, while she was in her mom's tummy. What that has to do with the wedding going on at the moment is still unknown, but that doesn't mean her speech wasn't adorable. After talking about going to a new school and going "night night," she then gets to the situation at hand: the wedding.

After telling the couple that she loves them, she explains that she's "so happy that [they] got married," after which the audience goes wild with applause. It's then that a man attempts to take the microphone from the charming little tot, but she ignores his grasp and keeps on talking, like a champ.

Of course, while she probably didn't mean anything by it, her remark that the couple "got married, only now, today," is pretty sassy, making the toast that much cuter. She goes on to address the groom, her "uncle Mark," although her remarks quickly get drowned out by laughter and more applause. Whatever she had to say, though, it's pretty safe to assume that it was equal parts hilarious and sweet.

In a time when weddings can bring on serious bouts of anxiety, this little girl's toast brings just the reprieve (and laughter) everyone could use.