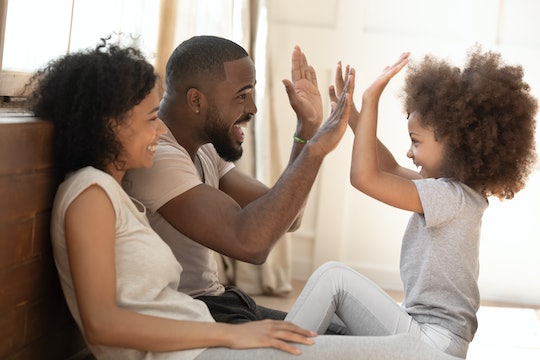 On the third Sunday of June, we celebrate the fathers who have impacted our lives for the better. Which means over the past weekend, there were plenty of Father's Day tributes on social media, dinners in dads' honor, gifts, etc. It's his day, after all. However, one columnist from The New York Times took things a bit too far. Because this man argues dads work harder than moms — and Twitter has some feelings.

New York Times' Opinion writer Ross Douthat most definitely opened up a giant can of worms when his piece titled "Can Dads Have It All?" was published on Sunday, June 16. Because it's one thing to sing the praises of all the hard-working dads out there. But to pit them directly against moms? Yeah, not cool.

"On Father’s Day the honor of the Good Dad must be defended," Douthat wrote. "Yes, fathers still do much less work around the house than moms, even when both spouses hold down paying jobs. But as Robert VerBruggen points out in an essay for the Institute of Family Studies, “The Myth of the ‘Lazy’ Father,” when you add up housework, paid work and child care, married fathers today are doing slightly more work than married mothers."

Douthat went on to explain that this is true of different household configurations — from families with two full-time working parents to families in which the husband is the only person who has a paying job — except for families with SAH dads and full-time working moms. "Moreover, in one data set the male-female work gap has actually expanded slightly since the 1960s, from 1.5 to four hours," he noted.

I'm sorry, but so many things about this just aren't adding up. Like the fact that grocery shopping wasn't included in housework, according to Institute for Family Studies (IFS.) And what counts separately as "housework" and "childcare" exactly? Because with four kids at home, juggling housework and childcare at the same time is kind of a constant thing during my waking hours. Not to mention that the IFS is a conservative think tank that's kinda, sorta, totally biased and anti-LGBTQ.

As you can imagine, Twitter had, erm, some thoughts. One Twitter user wrote, "I know we make fun of him, but I really hope Ross Douthat finally gets the respect of his wife, a mop tied to the top of a roomba." LOL.

Yet another Twitter user pointed out, "This is not backed by any data (mothers have increased childcare and housework as they’ve added careers, and if they didn’t take a pay hit for being mothers would contrib even more). But more to the point, this is the sort of tit for tat whiny bullsh*t that leads to nowhere." Agreed.

Another person wrote, "Why is the NYT publishing what is clearly your side of an argument with your wife. 'I am working just as hard as you in this marriage!! Fine don’t listen, just wait until you see the Sunday Times!'"

Yet another Twitter user chimed in with, "Surely there was someone somewhere at the newspaper who could have said 'Ross we're not publishing this, it's pitiful'?"

And this person nailed it perfectly, in my opinion, writing, "If they need child care, the woman is working and they are almost certainly splitting the costs. If she's not, she's a full-time parent. Either way, if she's also spending more time doing household chores, how does that "more than their fair share" work out again?"

All I have to say is: What about the countless studies proving that women are working more than ever while still tackling most of the household duties? Not to mention more often than not, it's women who bear the burden of the emotional labor in the family. I guess that counts for nothing. Sorry not sorry, but I'm calling BS on the whole thing.