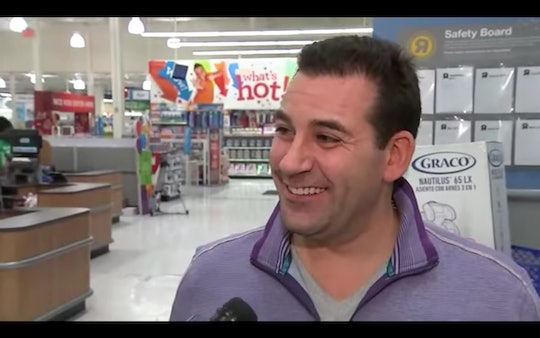 This Man's Heartwarming Gesture Paid For $10,000 Worth Of Toys For Other Families' Kids

Black Friday gets a bad rap as Thanksgiving's ugly stepsister. Less than 24 hours after celebrating what they're thankful for, hoards of shoppers trample one another for sales. And while I'm a big fan of discounted shoes, I can see where these critics are coming from. But a man who bought $10,000 worth of toys on Black Friday for other people's kids proves that the second November holiday has the potential for good, too.

This Black Friday, one New Jersey man spent his day preparing one heck of a holiday surprise for families in his area. Choosing to remain somewhat anonymous, the man has been identified only as "Charlie K.," Charlie told local news station CBS 3 that he was initially only going to face the crowds for his own son's shopping list, but inspiration stuck.

Instead, he went to his local Toys "R" Us store in Cherry Hill and paid for more than 60 orders that other customers had put on layaway in preparation for Christmas. The orders rang up at over $10,000, according to WMUR.

When asked by CBS 3 what inspired him, he explained that he did it all for his community. "I’m trying to bring some happiness to people, to the community that brought happiness to me and my family," he told the outlet. "I love this community and I am trying to provide back to it."

A spokesperson for Toys "R" Us confirmed the story with HuffPost, and provided NJ.com with a specific amount spent on the layaway purchases:

We love the heartwarming acts of one secret Santa who visited Toys R Us Cherry Hill this morning - Charlie K. paid off more than 62 Layaway orders totaling approximately $10,780.

Along with helping families in his community, HuffPost reported that the Secret Santa known only as Charlie K. also spent $2,000 on toys to be donated to Toys for Tots, the U.S. Marine Corps Reserve charity that provides toys to needy families.

This sort of generosity seems to pop up around the holidays. In the 2014 holiday season, for example, several "Layaway Angels" paid off over $50,000 worth of layaway orders each in states across the country, as TODAY reported at the time. In the face of so much capitalistic greed, selfless acts such as these really embody the reason for the season.

While shopping sprees of this magnitude are likely out the question for many shoppers this year, there are plenty of ways to spread some holiday cheer. Even just a small layaway payoff can mean a lot to a family who is strapped for cash around the holidays. If you're looking for something a bit more hands-on than paying off gifts chosen by the family, there are a number of organizations that accept toy donations around the holidays.

A popular choice, and one that was chosen by Charlie K. himself, is Toys for Tots. With locations all over the country, Toys for Tots is a convenient organization to donate through. Simply purchase a new toy and place it, unwrapped, in a designated donation bin between October and December.

If you're thinking smaller, Operation Christmas Child challenges good Samaritans to pack as many goodies into a shoebox as they can. These gift boxes are then sent to needy children around the world for the holidays. Boxes are accepted year round, but there are designated donation times that depend on the location.

My personal favorite cause to donate to at Christmastime is Angel Tree. Led by the evangelical organization Prison Fellowship, Angel Tree provides holiday gifts to children who have at least one parent incarcerated. While participants choose and purchase the gifts, they are given in the name of the incarcerated parent with the intention of connecting children and parents. With minimal costs between $15-25, Angel Tree gifts can be fit into almost any budget.

Any one of these charitable gift options would make an excellent choice this holiday season, because not every family has the ability to create the holiday experience that they would like to for their children. And, making giving a family affair is a great way to help others and teach kids to give along with receive, and keep greed from being the focus of the holidays. Consider following Charlie K.'s example and maybe including your little ones in on the giving fun this year.