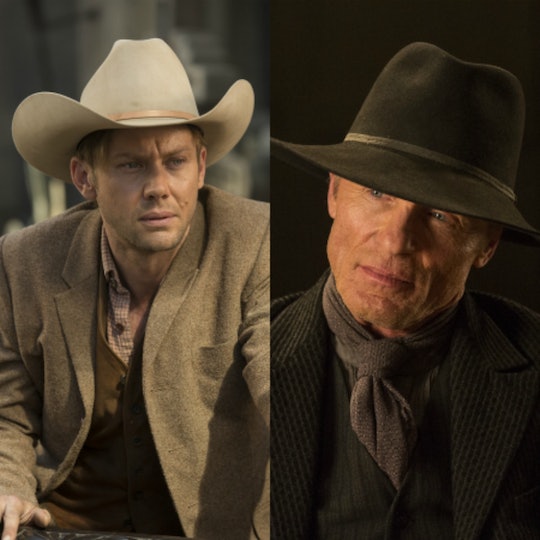 There are so many things to love about Westworld. The phenomenal performances, the amazing music, the beautiful visuals and scenery are all contenders for the short list. On top of all that, the show is filled with subtle hints towards a much deeper story, leading viewers to form many well thought-out fan theories. One popular theory connects two leading characters in a surprising way – and this Man in Black and William Westworld theory might have been confirmed in the latest installment, "Contrapasso."

For those unfamiliar with what is arguably the most likely of the Westworld theories floating around out there on the internet, it's very straightforward. Many viewers believe that we're actually watching two separate time periods simultaneously. One, with Hector, Maeve, Teddy, the Man in Black, and the Westworld employees, is the present. The other, with William, Logan, and Dolores, is approximately 35 years earlier and is the origin story of the man we'll come to know as the Man in Black – formerly known as William.

The evidence for this theory thus far is surprisingly solid, and "Contrapasso" serves to make it even more likely to be proven true. Here are several pieces of evidence from tonight's episode that appear to support the William = Man in Black theory.

Thus far in the season, William has resisted "giving in" to Westworld's temptations. He's been the quintessential "White Hat." Whether it's pleasures of the sexual variety or straight-up violent debauchery, William has 100% not been into indulging in anything. He turned down Clementine's advances twice (most prominently on "The Stray") and has refused to resort to violence – unless, of course, saving a damsel in distress.

But "Contrapasso" saw William finally lose his cool, several times. First, he killed several of the Union soldiers during the nitroglycerin robbery. This is a prominent moment because he'd promised the group that nobody would get hurt, and Dolores was, obviously, horrified at the sudden violent outburst. Plus, that steely-eyed look William got when he shot the soldiers and "saved" Logan? It's pretty familiar – quite similar to the hardened look we've seen in the Man in Black's eyes ever since he was introduced.

Also notably, William kissed Dolores. Though technically she initiated the kiss, he was all too interested in continuing it. On top of all that, William abandoned Logan, allowing his frenemy (and future brother-in-law) to be beaten to a pulp while he escaped with Dolores. By all accounts, William has stopped "playing along" and is now all in on Westworld – which could be a dangerous first step in the direction of becoming the park's "ultimate villain" in the future.

Exhibit B – William's Confrontation With Logan

Recall that, back on "Dissonance Theory," the Man in Black was approached about his own business. Another Westworld guest commented on the fact that he recognized the Man in Black and that MiB's company saved his sister's life. William's confrontation with Logan seemed positioned to precipitate William's eventual rise, in which he'd become superior to Logan (or, even darker, kill Logan and usurp his place). What if the company William and Logan work for is one that William will eventually come to take over... as the Man in Black?

Exhibit C – Dolores And The Maze

"Dissonance Theory" started off Dolores' quest for the maze in earnest. She is apparently being "led" to the maze by a voice in her head – presumably Arnold's, based on Dolores' conversation with Ford during the latest installment.

Assuming that William does, indeed, become the Man in Black, and that we are simultaneously watching the present (MiB looking for the maze) as well as MiB's origin story, it would make complete sense that his first knowledge of the maze is linked to Dolores' earlier quest for it. Maybe he would later decide to return to Westworld and find it because Dolores failed to, and he is looking to finish her earlier Arnold-guided mission to destroy Westworld.

Exhibit D – The Man In Black's Conversation With Ford

During a very tense conversation, MiB attempted to explain to Ford why he is seeking the maze. Ford asked, quite straightforwardly, why he doesn't just ask for "the moral of the story" if that's what he's seeking. MiB retorted that he'd need to dig up a "man [who] died 35 years ago" in order to get the moral. While not definite, it's quite clear that this man he's referring to is very likely Arnold, Ford's former partner and the most likely culprit for the one who's leading Dolores astray during the William/Dolores scenes.

MiB also explained that the "man" he's referring to almost took Westworld down with him when he died 35 years earlier – and would have, if not for MiB. This seems like a huge hint that the Dolores/William portion of the storyline is heading towards some encounter with Arnold – one in which Dolores (wittingly or unwittingly) participates in nearly destroying the park, only for William to prevent that from happening.

This little tidbit also manages to explain why MiB has super-special VIP privileges while in Westworld. After all, he literally saved the place from being destroyed –according to him, anyway. That's as good a reason as any to give somebody a VIP pass.