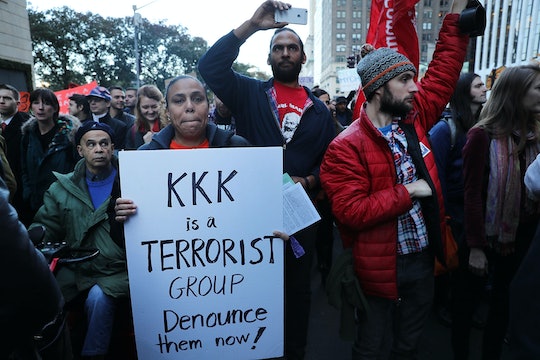 A reported 867 hate incidents occurred in the 10 days after Donald Trump won the presidential election on Nov. 8, the Southern Poverty Law Center (SPLC) reported this week. Schools hold the highest count of reported incidents, with anti-immigrant and anti-black rhetoric remaining the most common hate incident motivation. The map of post-election hate incidents below reveals just how divisive the entire campaign (and, perhaps more specifically, Trump's campaign) really was; Rather than encouraging Americans to unite over a shared ideology, the election season spurred on hateful speech which, some would say, has now been legitimized by a Trump presidency.

"Trump won, you're going back to Mexico" and "build a wall" chants, racial slurs, and white supremacist-promoting graffiti are common forms of post-election hate incidents in schools. The SPLC also categorizes possible incidents as anti-LGBT, anti-Semitic, White Nationalist, and anti-Trump, noting that 23 of the 867 incidents were against the president-elect.

In the report, 40 percent of incidents cited Trump by name, and nearly a quarter of the incidents occurred the on the day after Election Day. Interestingly, the map doesn't show any clear correlation between how a state voted and the number of incidents reported; In total, 378 of the reported crimes occurred in red states against 478 in blue states. Though blue states show a higher total number of incidents in comparison to red, the SPLC hasn't offered any possible analysis on why this might be.

On his Nov. 13 60 Minutes segment, Trump said he was "so saddened to hear" that Latinos and Muslims were facing an uptick in discrimination. Trump's response? "'Stop it.' If it — if it helps, I will say this, and I will say right to the cameras: 'Stop it.'" Though in the past Trump has said offensive and anti-Muslim statements like "we have a problem in this country, it’s called Muslims," and anti-Latino statements such as "they're bringing drugs, they’re bringing crime, they’re rapists," all Trump offered in response was a firm "stop it."

In a series of tweets, the SPLC remarked, "The U.S. has a long history of harassment, but the targets of these post-election hate incidents report they’re experiencing something new." The organization also questioned Trump's disbelief of said incidents, saying: "It’s hard to believe Trump was 'surprised to hear' about these incidents when harassers are quoting Trump’s own words and campaign phrases."

The report's trends show that the number of incidents has continued to steadily decrease since Election Day. Whereas this is definitely the preferred direction, one worry is of the potential spike that would occur again, this time around Trump's inauguration. Hopefully, Trump could do his part to prevent this from happening — either by retracting his own past statements or by promoting a more firm, anti-harassment message, but both cases seem unlikely; Trump appears to be too busy tweeting about flag burning and appointing friends to his Cabinet to acknowledge the trend that keeps a large portion of Americans feeling unsafe and unsupported.