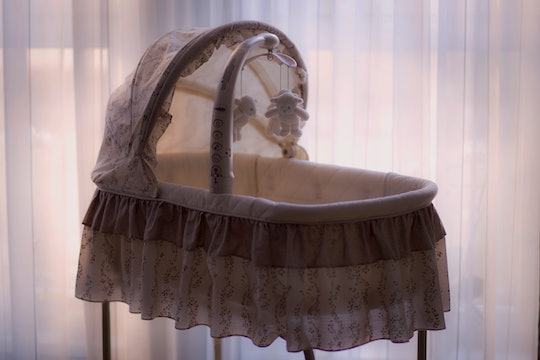 This Map Of SIDS Cases Across The US Is Enlightening

According to the most recent data available, there were 3,700 cases of sudden unexplained infant death in the United States in 2015. The CDC divides these cases into three categories: Sudden infant death syndrome (SIDS), unknown causes, and accidental suffocation or strangulation cases. Deaths from SIDS accounted for 43 percent of the 3,700 cases of unexplained infant death throughout the U.S. in 2015. Looking at the trends in SIDS deaths from 2007-2014, this map of SIDS cases across the U.S. shows where rates are the highest — but it's important to understand how that data is collected and analyzed.

Sudden Infant Death Syndrome, called SIDS, is the leading cause of death for babies under the age of 1 year, according to the National Institutes of Health. The majority of cases occur before a baby is 6 months old, and they tend to be more frequently reported in boys. In 2015, about 1,500 babies died of SIDS in the U.S., and that number has been steadily trending down over the last several decades — in large part due to education campaigns by the CDC and others. While the CDC is tracking unexplained infant deaths on a large scale, the breakdown for each individual state is limited due to confidentiality laws. SIDS and other cases of sudden infant death are formally investigated to rule out causes such a homicide. Even if the case is ruled a SIDS death, parents are often anguished and many fear that they will be blamed. SIDS is not the result of neglect; in fact, exactly why it happens is not known. But this is rarely reassuring to parents. Because of these factors, data from states that have fewer than 10 cases per year is suppressed to protect the identity of the families.

That being said, the CDC does track and report SIDS cases throughout the U.S. in relation to the number of births for each state. The resulting data shows the ratio of those sudden, otherwise unexplained infant deaths to the total number of births in that state each year. As previously mentioned, data from states that reported fewer than 10 SIDS deaths is suppressed to protect the identity of the families, but it should also be noted that data from states reporting fewer than 20 deaths is considered "unreliable" by standards of precision.

Given these and other variables that determine how data is reported, how the CDC organizes and analyzes it, and how it's ultimately presented, it can be difficult to asses whether there are states where SIDS is more likely to occur. In bigger states, the higher numbers or ratios may be reflections of their larger populations, not that there are necessarily more cases. Looking at the numbers in each state, however, considering other socioeconomic issues as a possible influence on the rates of SIDS deaths is important, too. Access to and the quality of healthcare for women and children in each state, for example, would put the CDC's data into context. The CDC has collected demographic data from SIDS cases and found that across the U.S., SIDS rates are highest amongst American Indian, Alaska Native, and non-Hispanic Black populations — more than twice the rates in non-Hispanic White populations.

While there's a lot that the data has yet to reveal about SIDS, one thing that's true no matter where infants live is that the possibility of SIDS continues to be terrifying for parents.

Despite the fact that it doesn't happen very often, parents still fear SIDS because it often appears to strike otherwise healthy babies seemingly out of nowhere. Over the years, research has linked certain environmental factors like sleeping position to an increased incidence of SIDS, according to NPR. But even with educational campaigns that increase awareness of safe sleeping practices, SIDS deaths still happen. That's why the CDC continues to track the cases, in hopes of developing a better understanding of why they happen, and what might be able to be done to prevent them. There are many organizations nationwide devoted to educating parents and caregivers about SIDS/SUID, and the CDC has many resources available on their website.