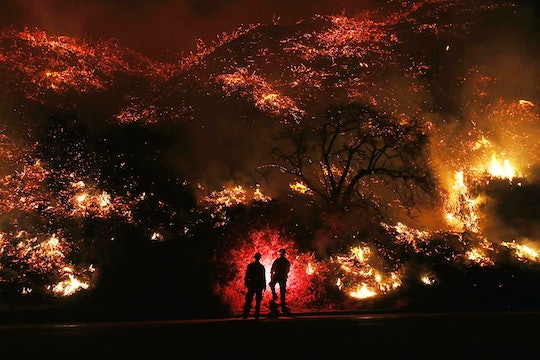 California Gov. Jerry Brown has declared states of emergency in Los Angeles and Ventura counties as relentless wildfires rage through, according to a tweet from Brown's press office. They're ripping across cliffs, roaring across acres of land and engulfing people’s homes. And, now, a map of the California wildfires is circulating, depicting just how dangerous the situation is becoming.

Skirball Fire is only the latest to break out since Sunday. Ventura, California has become a site of massive evacuation, according to The Washington Post. The publication reported that "more than 50,000 people from 15,000 homes" have been evacuated by officials. The newspaper also said that the fire has already spread across and burned "90,000 acres," as of Wednesday.

Now, dangerous wind forecasts are expected to fan the flames in different directions and exacerbate conditions. As of Thursday morning, winds already topped 50 mph in the greater Los Angeles area, and they can be carrying embers that could spark new fires as far as 10 miles away, Fire Department Chief Ralph M. Terrazas said at a news conference Wednesday.

These Santa-Ana winds have pushed the fierce fires far beyond red, which means “high” on the California Department of Forestry and Fire Protection's color-coded alarm system; they’ve now reached purple, which means “extreme,” according to a tweet from the department.

Terrazas also said at the conference that the fire risk is at the highest level he has ever seen in his career.

Residents across the region are growing evermore concerned, as more than 200,000 people have been forcibly replaced and 200 homes and buildings have been destroyed as a result of the wind-driven firestorm.

“We are in the beginning of a protracted wind event,” Ken Pimlott, director of the California Department of Forestry and FireProtection (Cal Fire), told the Los Angeles Times. “There will be no ability to fight fire in these kinds of winds.”

Pimlott warns of winds that could reach 80 mph. Coupled with parched vegetation, the region is particularly vulnerable to new fires.

This map shows just how dangerous the fires have become as of Wednesday morning:

“Our plan here is to try to stop this fire before it becomes something bigger,” Los Angeles Mayor Eric Garcetti said at an earlier news briefing, according to People.

While the Thomas Fire has claimed the lives of more than two dozen horses at a stable and abolished at least 150 structures, there have fortunately been no reported fatalities or civilian injuries thus far, according to Reuters. That said, the Los Angeles Fire Department reports that three firefighters were injured and hospitalized in stable condition from the Skirball Fire. Per The Washington Post, thousands of emergency responders are working to keep residents safe.

“These are days that break your heart,” Mayor Garcetti continued. “These are also days that show the resilience of our city.”