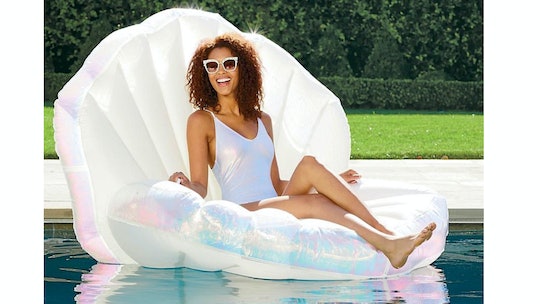 For A Cool $90, You Can Feel Like A Mermaid In This Massive Oyster Shell Float

Get ready for your mermaid moment. An adorable, over-sized oyster shell float will make you feel like the queen of the pool this summer, and you can get your hands on it for less than a hundred bucks.

Frontgate is selling the Instagram-worthy oyster float for $90. The massive inflatable is five feet long and and over four feet high, leaving plenty of room for posing (so if you've been hoping to recreate Botticelli's The Birth of Venus, for example, your dream has finally come true). The base of the float is a pearly white color, while the shell is bordered in an iridescent silvery shade. There are also handles on either side to give you a little stability when you're getting on or off, because you wouldn't want to mess up your perfectly styled mermaid hair by getting it drenched falling in the pool.

The float comes with an electric air pump, which saves you tons of time versus blowing it up manually. The less time spent huffing and puffing, the more time spent soaking up the sun, obviously. It also includes a repair kit so that if you accidentally bust a hole in it, you've got a shot at salvaging it. That's a nice perk for the price tag.

I think there might be an unwritten rule these days that you're not allowed to own a pool unless you've stocked it with some ridiculously large floats. It seems Taylor Swift is to thank for that. The pop star is credited with originating the giant float trend back in the summer of 2015, when WWD noted that she shared tons of Instagram shots of her and her squad splashing around on giant swans, flamingos, and a winged horse. Since then, it seems they're everywhere you look once the weather warms up. Just about every creature that you can think of, real or mythical, has been turned into a pool float. You can get a toucan, a unicorn, or even a T-rex to lounge on. You can even get one that will fit your entire family, like this enormous inflatable swan from Sam's Club that holds up to six people. It's so big you can't even call it a float anymore — it's an "inflatable party island."

The over-sized float fad doesn't seem to be going away anytime soon (seriously, just check out the #giantfloat hashtag on Instagram to see how much people love these things), so your oyster shell will be right on trend all summer long. And who knows, you might even be able to get some use out of your super-sized accessory well after the season's over. Scary Mommy pointed out that some owners thought up a hilarious bonus use for their floats, busting them out on snow days to go sledding in. I suppose if you can sled in a massive hot pink flamingo, you can give it a try with a giant oyster shell. It's a good thing it comes with that repair kit I mentioned.