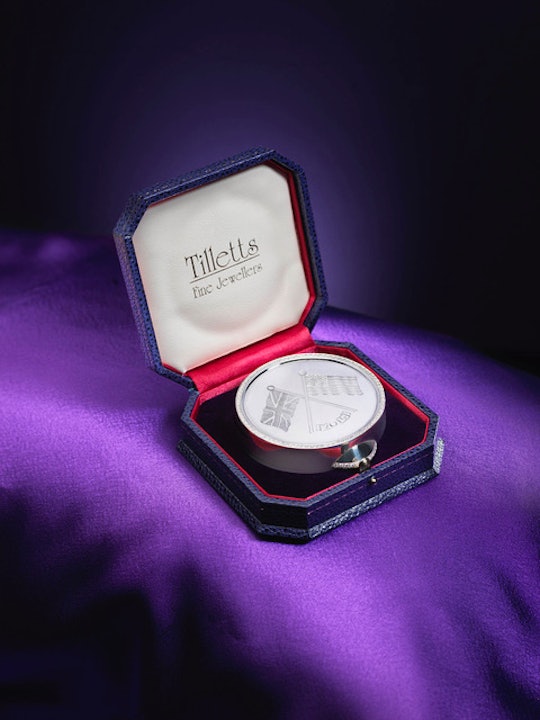 Oh Hey, You Can Get Butt Paste Out Of A Diamond Meghan Markle-Inspired Cream Lid Now

Just when you think you've heard all the ways that people with an unholy amount of money will spend their dollars in this weird capitalist dystopia, someone has to come in and top it. Or, in this case, bottom it? As it is, a jeweler in the UK is now making a new $6,000 diamond encrusted diaper cream lid, encrusted with crystals, in honor of Meghan Markle's baby. Because nothing says "laid back American princess with a yoga habit" quite like diamond heavy butt butter.

OK, so technically it's only $5,600, but I think most of us can agree that is a ton of dough to be spending on something that holds cream to spread on your baby's butt at 2 a.m. Dubbed "The Meghan Sparkle," it will be emblazoned with the Union Jack and Old Glory in honor of the doting parents who most certainly will not care about diamond diaper cream lids when their child is angry. It was handcrafted by Tilletts, which is a family-run jeweler in Norwich, UK, according to Business Insider. The Tillett family told Norwich News, "We wanted to create something that reflected the sparkling warmth and charm of Meghan's personality whilst also creating something unique to celebrate the imminent arrival of their baby." It certainly is... unique.

The description kills me. "World's most expensive nappy cream lid." (This is where someone in America says "hold my beer" and makes one out of unobtanium and vibranium mixed with the blood of virgins or something.)

As per their website, "The 'Meghan Sparkle', diamond pave-set 925 sterling silver lid, hand-engraved with the flags of the United Kingdom and the United States of America, sized to fit a 125g pot of Sudocrem. Capturing the 'natural charisma and sparkle of Meghan herself' the lid will be sold with all the proceeds going to the charity Ickle Pickles which provides intensive care equipment for premature babies."

Dang it. They really ruin my flow with the whole charity angle. Yes, premature babies deserve many Pounds Sterling, but have they ever considered a bake sale? Perhaps a car wash? Heck, a raffle might be a better option. Conspicuous consumption might work for the Kardashians, but how on earth do you clean that thing? You know it's going to end up smeared with cream and any other manner of unmentionable substance. It's just a matter of time. Do you have to take it to a jeweler? Back to Tilletts is the only real solution. "Here, you clean it."

People love to chat about Meghan Markle and Prince Harry for their frequent press appearances, her super stylish maternity clothing, and her seemingly strained relationship with her father. It's no doubt that this rash blaster dripping with diamonds will be rife for office water cooler conversations the world over. Which might be pretty darned good business for a small jeweler in a mid-sized British town. She's due sometime in April, and this gives the jeweler plenty of time to drum up media support on this before it's overshadowed by baby news.

It's not going to be my first choice of diaper cream lid, even if it's for charity, and I doubt it will be more than a blip on anyone's radar. (If not only because we cannot get that cream stateside very easily, though I hear good things from friends across the pond.)

However, if you're in the market for what amounts to a royal crown covered tub of baby butt relief, look no further because Tilletts new $6K diamond encrusted diaper cream lid is now available, and ready to grace your changing table.