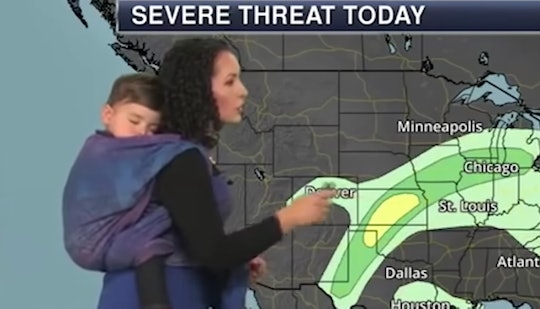 This Meteorologist Wore Her Son On Air To Promote Babywearing, & Hello #MomGoals

It's no secret that motherhood often invites an unending stream of unsolicited advice and judgment, and it seems that women in the spotlight are a particularly easy target for people who can't manage to keep their opinions to themselves. Female newscasters and meteorologists may not be high-profile celebrities getting regularly mom-shamed on Instagram, but the fact that they appear on television means they seem to court plenty of public criticism, most of which is linked to their appearance. So when this meteorologist wore her son on air to promote babywearing during a recent weather forecast she was definitely making a major statement.

On Oct. 5, Minnesota meteorologist Susie Martin wore her 21-month-old son in a wrap on her back while giving her usual weather report, and in a clip of the forecast, shared by ABC 7 News, Martin explained she decided to bring out her "handy assistant" in celebration of International Babywearing Week. The tot yawned and slept his way through his mom's forecast, which was broadcast nationally, but aside from being extra adorable the segment was otherwise totally run-of-the-mill. And though it definitely raised awareness about babywearing, it also made an important point about what it really means to support mothers in the workplace. Although the expectation placed on working moms is often that they should somehow continue their professional lives as though they haven't had children, Martin's segment proved that, actually, it's entirely possible to be a mom and do your job simultaneously.

Unsurprisingly, it didn't take long for the clip to go viral: on social media, the segment has received millions of views and has also earned countless comments from supportive viewers — both women and men — who are applauding Martin for her decision. On Tuesday, Martin — who also serves as director of operations for Praedictix — took to the company's blog to discuss the segment, writing:

I truly am stunned at all the attention it has gotten. From your comments, I can see that it brought smiles to many people’s faces. I just love that! I want to thank everyone who took the time to write kind comments, emails, and messages.

Martin also took the opportunity to answer some common questions that viewers seemed to have about babywearing, including why she decided to wear her son on-air in the first place. Martin explained that babywearing had "been a passion" of hers since her son was born, and added that it "helped [her] and [her] son bond during the early stages of infancy." Now that her son is a bit older though, Martin said that babywearing is also just really practical. She wrote:

It was and still is incredibly liberating to be able to comfort my child whilst doing other tasks, which has helped me be a happier mom. To this day, it is a source of comfort and calmness for him ... If I could inspire at least one parent to try babywearing and if it helped them even a fraction as much as it has helped me and my family, it would be well worth it.

That the viral segment wasn't actually the first time Martin had worn her son on television, though. For International Babywearing Week a year ago, she'd also worn her son in a wrap during a forecast, this time for Spectrum News Kentucky. And since it was well-received, she thought she'd do it again this year:

According to Babywearing International, a non-profit organization whose goal is "to promote babywearing as a universally accepted practice," there are many benefits of babywearing. One study, for example, has shown that it may reduce infant crying which, let's be honest, is already an incredibly compelling reason to give it a try. But it also just gives parents a chance to have a bit more freedom: when a baby is in a wrap, moms and dads can cuddle and bond with their little ones, while still having their hands free, meaning they can go about their days, or tend to older children, while at the same time giving their babies the benefit of a warm, cozy, bonding snuggle.

Of course, not all women will have the same opportunity to strap their little ones on their backs and head to work, and Martin acknowledged in her blog post that she is "fortunate to work for a company that has been very supportive." But hopefully Martin's example can help show that employers don't have to view motherhood as something that will inevitably be detrimental to women's work. So while she may have simply been trying to highlight the practice of babywearing, Martin has also served up a pretty powerful reminder that a woman can absolutely be a mom and a total boss.