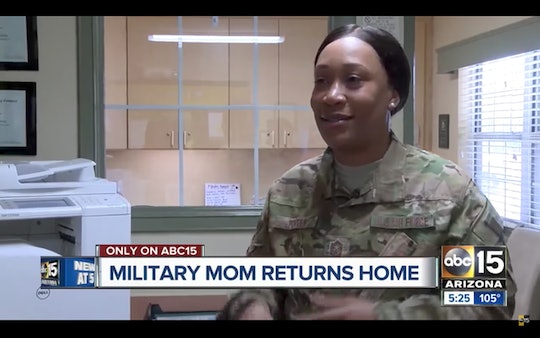 Being a mom is hard. Being in the military is hard. Combine the two and you're looking at Wonder Woman. Aside from being at the front of conflict, one of the most heartbreaking parts of military parenthood is enduring separation from your family. Thankfully, homecomings are a beautiful thing and the way this military mom surprised her kids after returning from deployment awas so sweet.

U.S. Air Force Master Sgt. Shania Porter recently returned from a seven-month-long deployment away from her two young sons. Upon her return home, Porter decided to surprise 5-year-old Bryce and 4-year-old Blake at their schools in Arizona. According to ABC News, she first spoke over the intercom at Blake's school and told every study and staff member that she had “special announcement for a little boy that [she] flew so many miles to see.”

After making her exciting announcement, Porter headed to Blake's classroom. While his back was turned, she tapped him on the shoulder and quickly enveloped him in a hug.

One of the owners of Blake's school, Primrose School at Palm Valley, Karen Verlardi, shared her emotional reaction to the reunion with ABC news. She said that “to just see them together was incredible.”

As for Porter's other son, Bryce, she played a bit of a trick on the boy before surprising him with her arrival. She chatted with him over FaceTime while he was at his school, Arizona’s Crown Charter School. During their conversation, she slowly revealed to him that she was, in fact, outside of the school doors. In true military brat fashion, Bryce ran into his mom's outstretched arms for their first embrace in seven months.

Stories such as Porter's re-enforce our understanding of both the love that parents have for their children and the struggles of serving in the military. As gut-wrenching as deployment family separations are, they are commonplace in the lives of service members. In a personal essay for Parents.com, the editors of Parents Magazine, both of whom are service members, shared their experiences with deploying far away from their little ones and explain how service plays into parenting:

Deployments are the rule, not the exception, when you've spent most of your adult life in the armed services.

For many American families, time apart due to military service is to be expected. But, that expectation certainly does not make coping with separation any easier. Indeed, there are unique struggles for both military parents and their children. For example, military moms, in particular, experience hardships that their civilian counterparts are spared. Among those are legal bias in custody disputes, lack of protective legislation, and the emotional trauma of time apart from little ones.

Children of military members, too, face challenges that their peers may not. When parents are deployed, children may experience a wide range of emotion including loneliness, fear, and panic at the thought of losing their loved ones.

Given the amount of hardship that is faced by both parents and children during deployments, it is great to see and hear about heartwarming reunions such as Porter's. And, it's good to know these two little boys are back in the loving arms of their loving mom.

So, thank you for your service, MSgt. Porter — and giving us all a reason to smile.