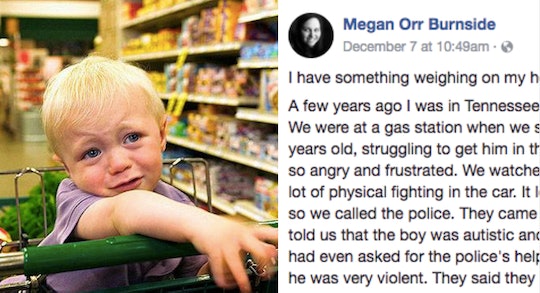 Before I had kids of my own, I was the perfect parent. No, really. I would witness a mom yelling at her young child (who was inevitably having a meltdown at a store) and think to myself, "Whoa, that mom is totally not in control. When I have kids, I will ever act this way." LOL. Or, I would witness rude behavior from a child at a restaurant, with a parent physically threatening the child and I'd think, "Holy crap. I would never allow that to happen. Why don't they just leave?" Needless to say, I got a reality check (and my due karma) after becoming a mother. Because sometimes, kids act like jerks in public — and sometimes, it's the last straw for parents and they lose it for a moment. Well, this mom called the cops on another mom, and now she's sharing a must-read message for parents and non-parents alike.

Mom of five Megan Burnside shared a powerful lesson in a recent Facebook post. And with more than 12,000 likes and nearly as many shares, it's clear this mom's message has hit a nerve. She starts off by remembering an encounter she had years ago — one that she still feels bad about today. Burnside had called the police on a mom who was struggling with her son. "We were at a gas station when we saw a woman with a boy of about 10 years old, struggling to get him in the car. He was screaming and she was so angry and frustrated. We watched her get him in the car and there was a lot of physical fighting in the car. It looked like she was hitting him as well, so we called the police."

The police came and left, and soon Burnside received a call from the police, explaining the boy had autism and that his mom often struggled with him. In fact, she had even asked for officers' help in the past because he became particularly violent. The department has been helping this mom, the officer said, and she's doing the best she can. "I had the most overwhelming realization of my mistake," Burnside wrote. "In my eagerness to protect the child, I neglected to offer help to the mother. Instead I 'turned her in' to the authorities. We sat and watched her struggle and called her in. I have felt guilt even years later that I didn't get out of my car and offer her some help. If I had helped in that moment, it may not have led to more violence."

A few weeks ago, Burnside had the opportunity to react differently to another situation involving a struggling parent. A mom was waiting in line at a thrift store with her two sons — a fussy toddler and another boy asking his mother to buy things. She was so angry and explosive at both of them, the whole store was aware of them. People stood there and watched them struggle in the line," Burnside wrote. "I remembered the experience I had in Tennessee and walked over to talk to the little boy and put my hand on his foot. He calmed down. The mother was so frazzled and apologized. She told me she worked nights and she couldn't even think in the day." She continued:

I know there were other things going on, but in that moment I told her I understood what it's like to be overwhelmed. I told her she was a good mom. I told her everything was going to be okay. She cried, guys. She CRIED as everyone else watched her struggle with her burden. Years earlier I would have been holding my cell phone ready, watching to see if she did anything that I should report. I know there's a place for the authorities to step in, but I feel like we have become a culture who watches for faults instead of opportunities to help. We have become more separated and condemning, instead of compassionate and loving and serving. If we helped more, we would have to call the authorities less.

Finally, Burnside explained why she decided to share these experiences in the first place: Someone had called the Department of Children and Family Services (DCFS) on one of her close friends. This woman is someone Burnside admires as a mother — someone she has witnessed treat her children with love and patience. "When authorities were called by someone no doubt thinking they were 'helping,' she was very sick in bed with a respiratory infection," Burnside wrote. "I don't know what this person observed that they thought was a problem. Maybe her kids were running around without parental supervision? Maybe a parent wasn't feeding them so they were foraging for themselves? I am sad that the person who called her in didn't ask how they could HELP HER. It's time to stop judging each other and start helping each other, or we will only perpetuate isolation, depression, addictions, violence, and suicide." (Babble reports that the case has since been dropped. But still!)

Burnside's words are so true. Through my years of parenting, I've dealt with my fair share of grocery store line meltdowns. I'm always so appreciative of the strangers who attempt to distract my kiddos from their own misery by talking to them. (Sometimes that's all they need anyway.) Or the cashier the other day who offered my littlest one a sucker when she burst into tears regardless of whether I was holding her or setting her down while attempting to pay. These tiny acts of compassion aren't expected by any means, but they are certainly appreciated. And who knows? One kind gesture could be all it takes to completely change a situation for the better.

"When people are overwhelmed they need help, not condemnation," Burnside concluded. "I know I have been guilty for doing this very thing and I see clearly how I probably perpetuated the problem instead of helping to uplift and assist others. I am grateful for reminders (even painful reminders) that we are not that separate. We are not that different. True change comes when we are given love and help, not condemnation."

That's the kind of compassion we could all use a little more of. After all, many parents are often dealing with similar struggles, so the least they could do for each other is show understanding.