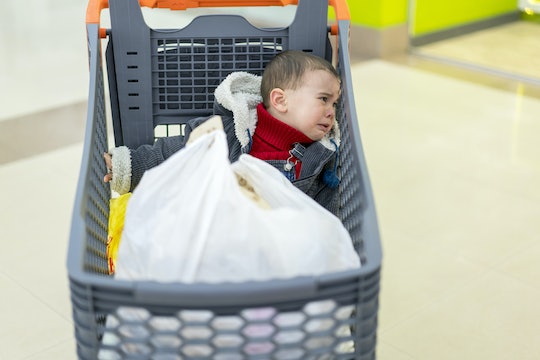 One of the most stressful things about parenting is having to deal with your child's tantrum in a public place. People can be unsympathetic to parents dealing with a little one's meltdown, to say the least, and it's not uncommon for onlookers to pass judgement on someone who is struggling to calm down their kid. But before you close the book on humanity just yet, do yourself a favor and check out this mom soothing a stranger's baby in Target. Yep, instead of giving the frazzled parent the stink eye, this empathetic mom offered viral-worthy kindness and understanding.

Rebecca Paterson, a mom in Texas, decided to brave a trip to Target on March 21 with her young sons in tow. Although Paterson is no stranger to shopping excursions, it marked her first solo trip with both of her kids: 2-month-old Aiden and 2-year-old Jacob, according to News 95.5, a local news station in Atlanta.

Needless to say, venturing out with your infant and toddler alone is no easy feat. From keeping both kids happy to possibly dealing with feeding issues, there is a long list of things that could go wrong. And unfortunately for Paterson, her day took a turn for the worse when her kids both started crying at the same dang time. When it rains it pours, right?

The "nightmare" day was saved, however, when a fellow parent named Tiffany Guillory decided to provide Paterson with some much-needed relief.

Guillory, who noticed that Paterson was about to leave the store out of embarrassment, offered to hold Jacob while they shopped around the store. “I said go ahead and do your grocery shopping, and I'll just hold Jacob and I'll talk to him,” Guillory recalled, according to KHOU 11. “I picked him up, put him in my arms, (and) I talked to him with a soothing voice.”

So, for a total of 45 minutes, Guillory carried Jacob in her arms while Paterson completed her errands. Someone erect a statue in Guillory's honor, stat.

Guillory felt especially moved by Paterson's struggle because like many other parents out there, she has been in this exact situation before.

“It really touched me. I know how it is. I’ve been there," Guillory explained, according to Southern Living. "I have two kids, it’s frustrating and that baby is 2 months. You have hormones going...and people are looking at you crazy, and I just wanted to help. God sent me there to help her.”

And at the end of the trip, Paterson decided to commemorate Guillory's extraordinary gesture with a photo, and she later shared the heartwarming pic to a local Facebook group for moms.

No, I'm not crying over this photo — there's just dust in my eye. Nothing to see here.

Of course, Paterson is extremely grateful that Guillory helped her out. "Kindness and understanding goes a long way, and I think it's true, because I didn't feel judged," Paterson told KHOU 11. "I had a helping hand, and I needed it at the moment."

But Paterson isn't the only person who is impressed by Guillory. Once word of the story got out, many parents took to Facebook to commend her empathetic act.

"Moms we have to stick together. It gets hard out here," one person wrote. "Always be willing to help out a sista."

Another person added: "It takes a village sometimes!"

Someone else pointed out: "There are still good people in the World!"

Although these impressed reactions are much deserved, one has to wonder why the story went viral in the first place. Does it say that parents are lacking the kindness they deserve? If Guillory's actions were commonplace, there's a good chance thousands of people wouldn't know her name by now. And one can only hope that acts of kindness like this will become ordinary as opposed to extraordinary as time goes on, because every parent deserves support.

More Like This
Does The FDA's Plan To Limit Lead In Baby Food Go Far Enough?
Keke Palmer Casually Drops Her Baby's Sex On Jimmy Fallon
Mom Gives Birth To Record-Breaking 16-Pound Baby
Chrissy Teigen Shares First Photo Of Esti & Now We All Have Baby Fever
What Parents Are Talking About — Delivered Straight To Your Inbox